This story has been around the internet for the past week or so but it’s just too unbelievable not to share again. Especially since I was there, spoke to the parties involved and took it all in with my own baby blues. Outrageous is putting it mildly and it’s every Hot Rodders nightmare. A stolen Hot rod. But in the case of this purloined ProCharger powered Challenger not only was it stolen, it was used and abused but luckily recovered. The Quintin Brothers built, Dodge Challenger was to be the center piece at the ProCharger booth at the SEMA Show this year. Unbelievably, it was stolen just days before the show started.

Shortly after the theft, the wide body, carbon fiber enhanced Challenger was taken on a 48 hour punishment tour of Las Vegas. The brazen thief started his criminal journey by doing burnouts all over town. He then unsuccessfully attempted to take the car on a Go Karting track. To evade capture he drove the Challenger through a chain link fence. From there, he was involved a 14 car police chase, again evading capture. He was later cornered in a parking garage but used the Dodge as a battering ram. He was able to push the Police SUV out of his way and flee yet again. Ultimately, he took the Challenger to a shopping mall. The thief left the car, went into the mall, presumably stole new clothing and got on a city bus abandoning the car in the parking garage. Soon thereafter, the Police recovered the car. 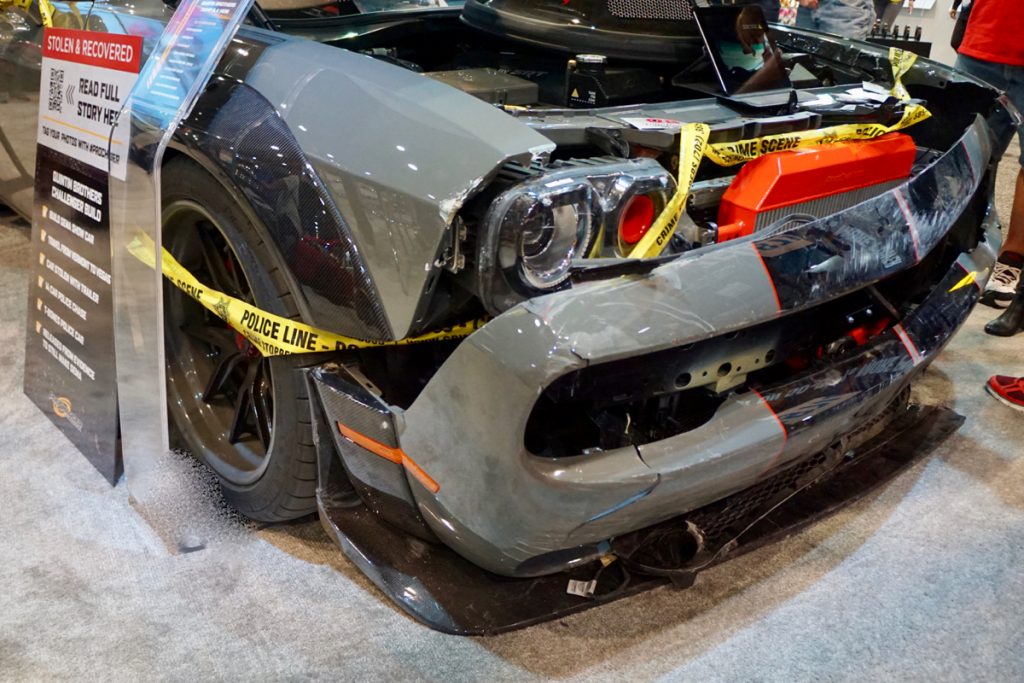 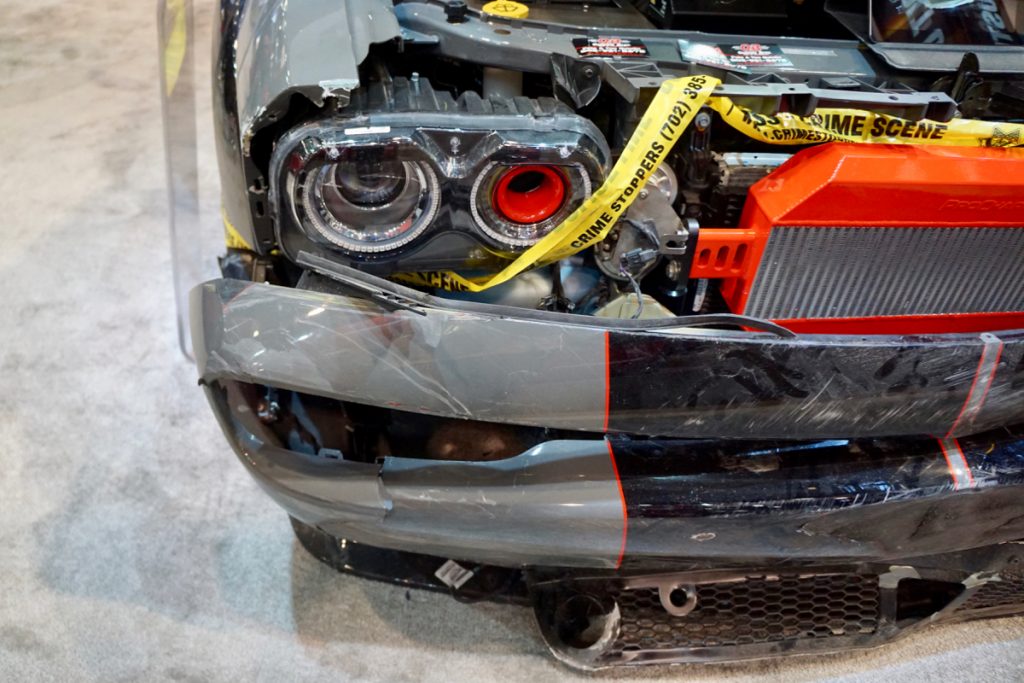 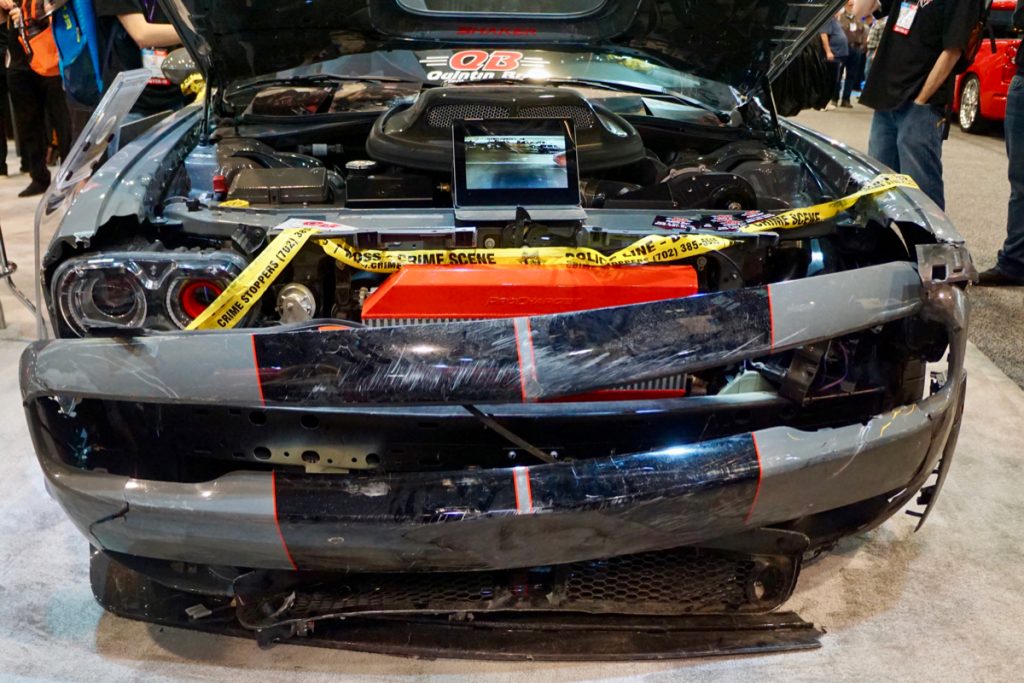 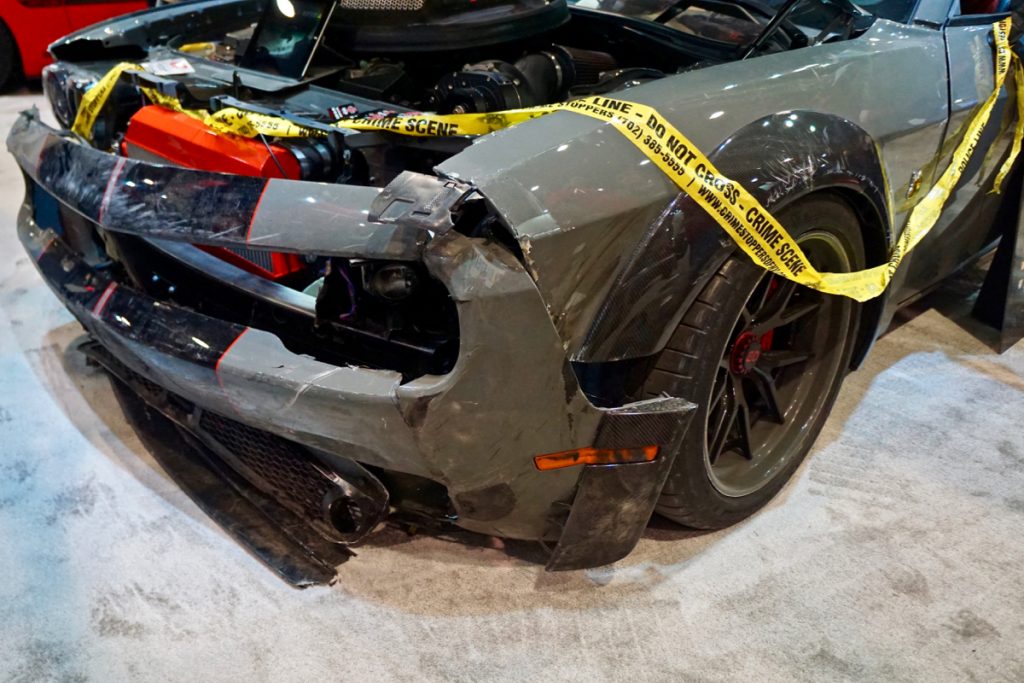 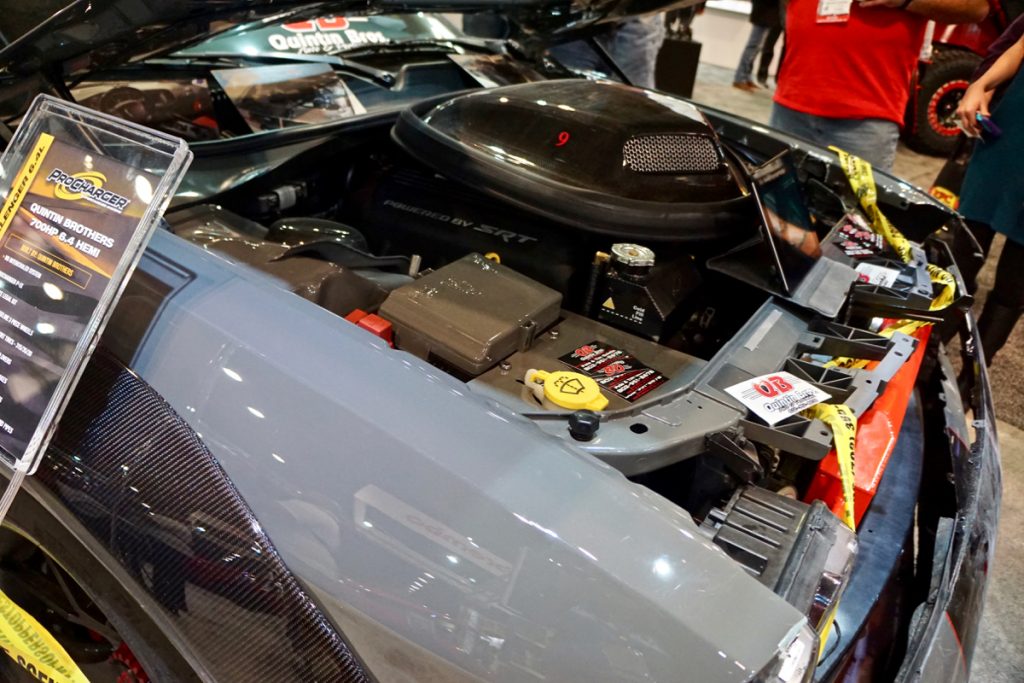 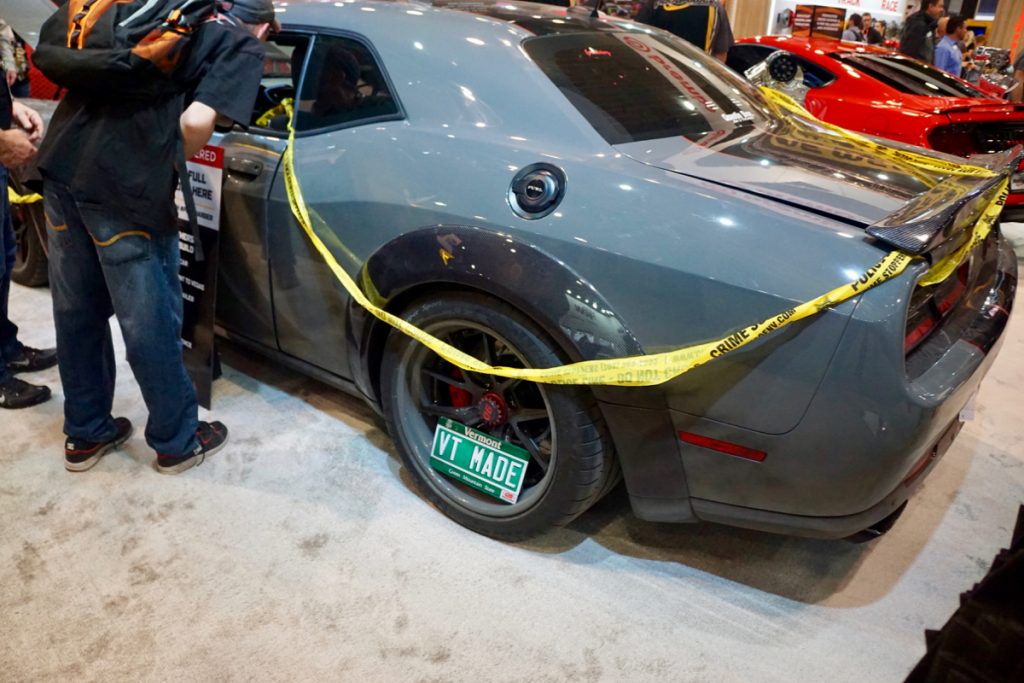 It is worth noting that the interior is equally as shocking as the exterior damage. During his flight from justice, the thief found the time to take the 6 figure build through a drive thru. The remains were still in the cup holder! The tools used to break into the trailer were still in the car and possibly most outrageous of all, there was a baby seat in strapped to the back seat. A baby seat! 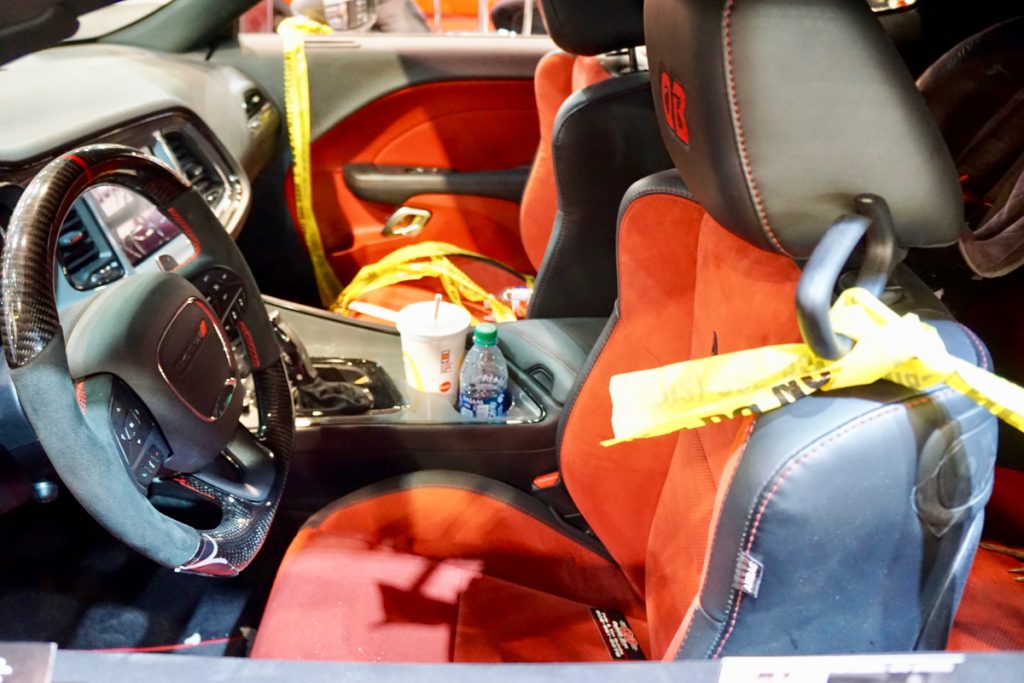 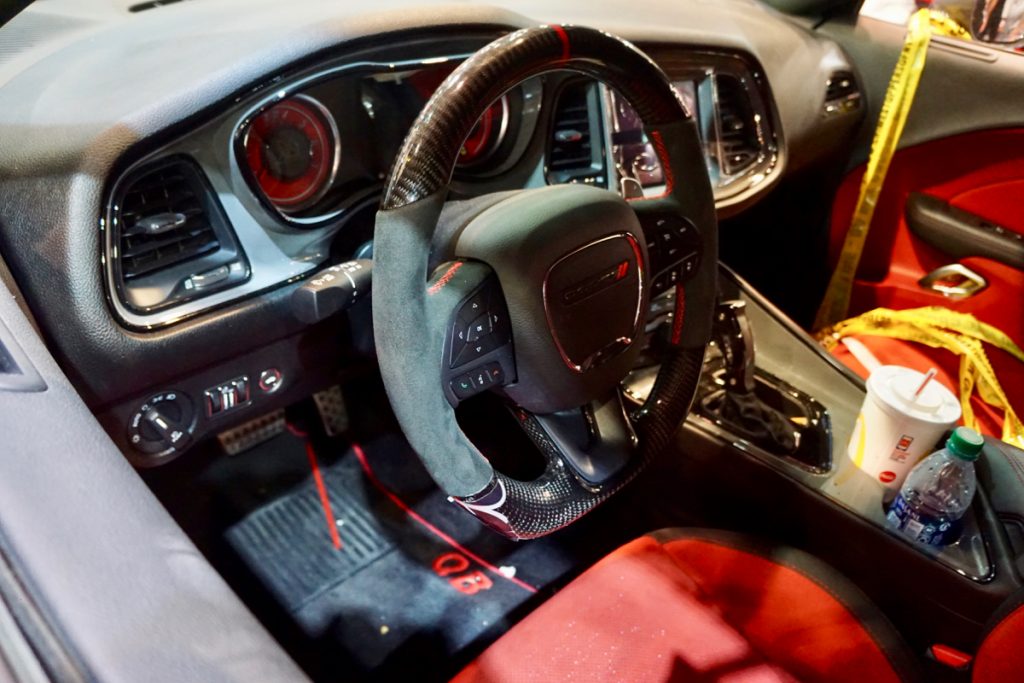 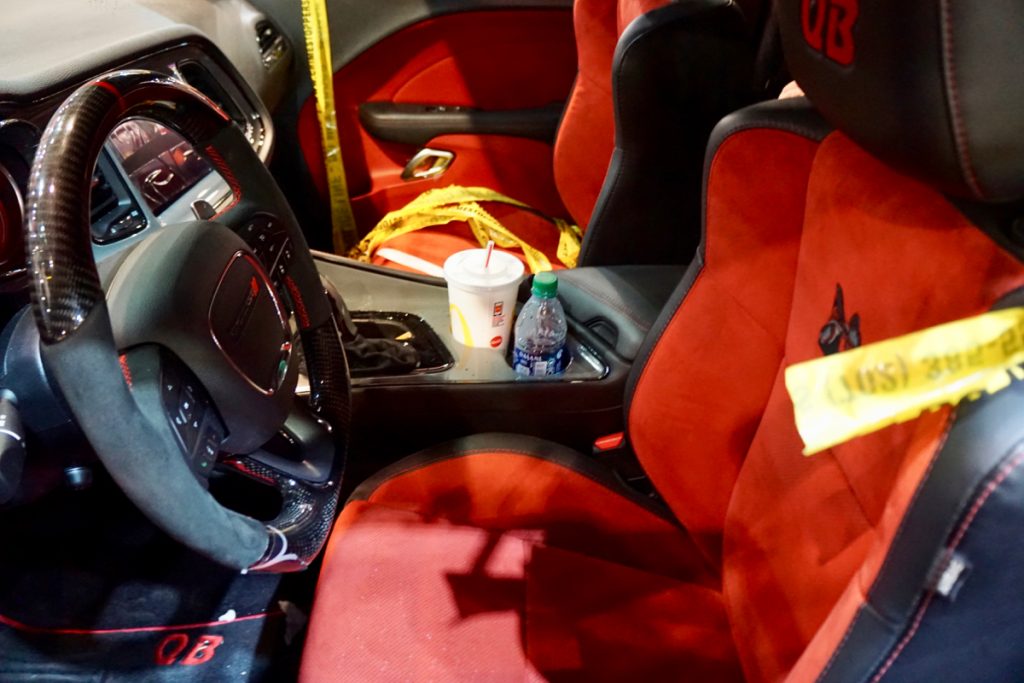 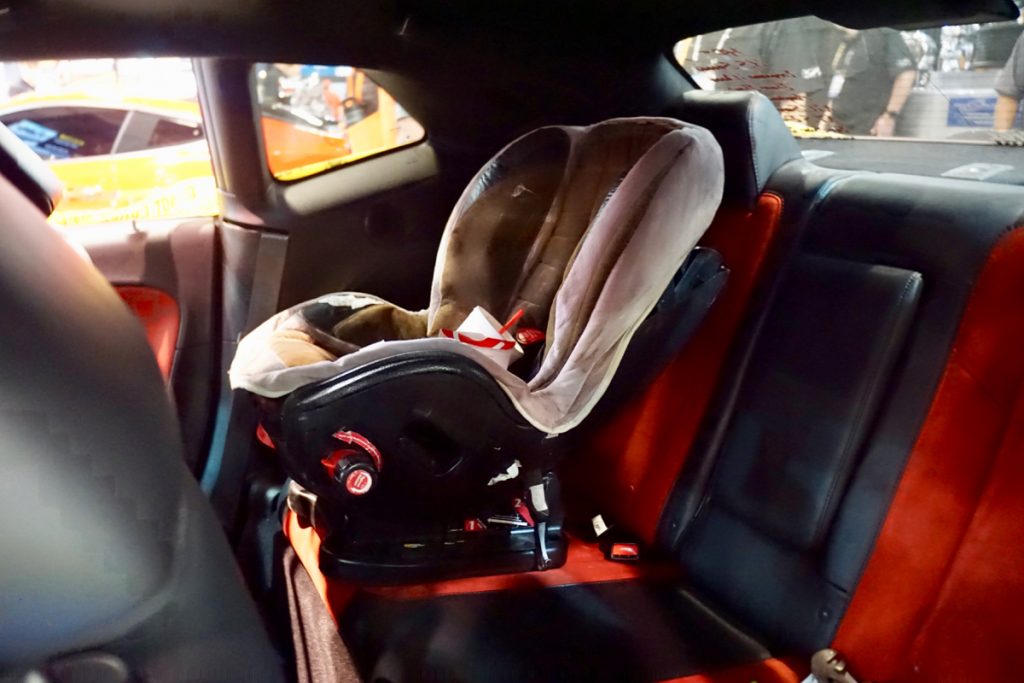 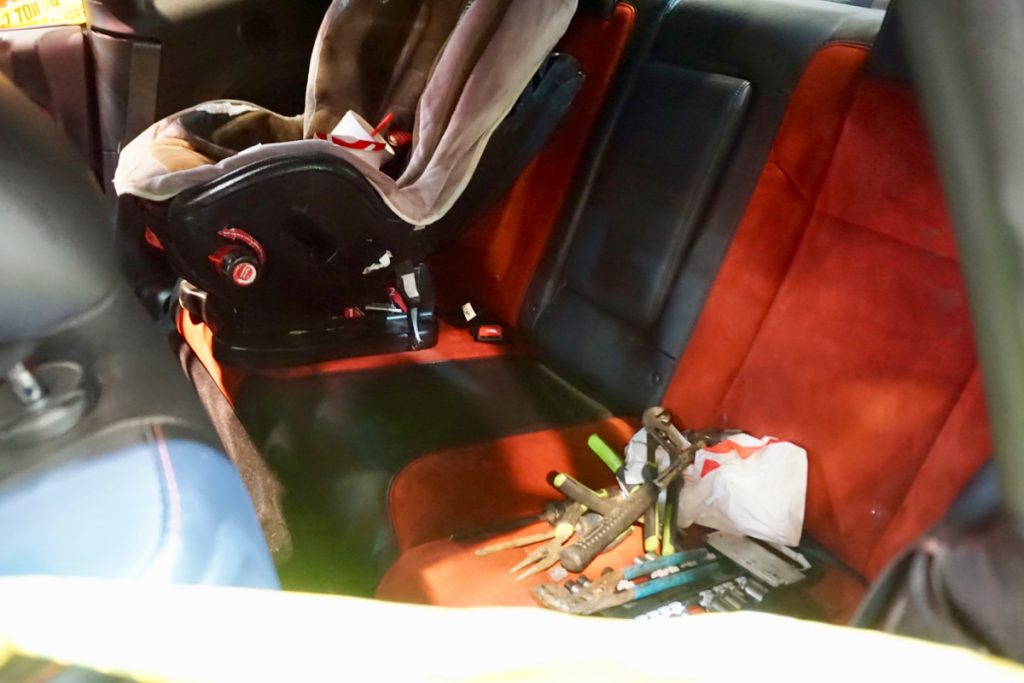 There were over 1,000 hours in the build with a price tag north of $200,000. The power plant is a Hemi enhanced by a ProCharger P-1X that puts out an impressive 700hp. Custom Forgeline wheels wrapped with Michelin’s finest clearly got the power to the pavement. Baer brakes worked wonderfully stopping all those ponies and a Borla Cat-Back exhaust gave a throaty voice to this custom built Challenger.

This build was going to be an in booth reveal for the new owner. Surreally though, the first glimpse the he got of his new Challenger was on the local Las Vegas news. A testament to a stout build, not only was the thief able to evade the police in a high speed chase (thank you ProCharger Supercharger) but after some minor repairs, the Dodge was able to drive into the convention center to take its place at the ProCharger booth. And there it sat for the entire SEMA Show wrapped in police tape, covered in fingerprint dust, with the remains of the criminal spree covering every inch of the destroyed Dodge. 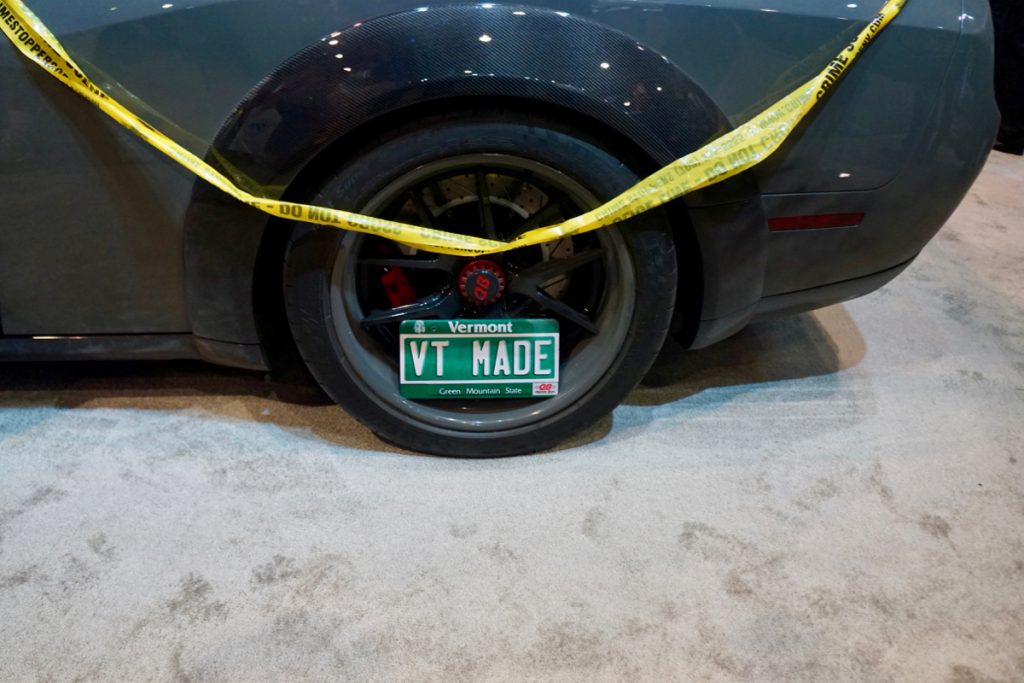 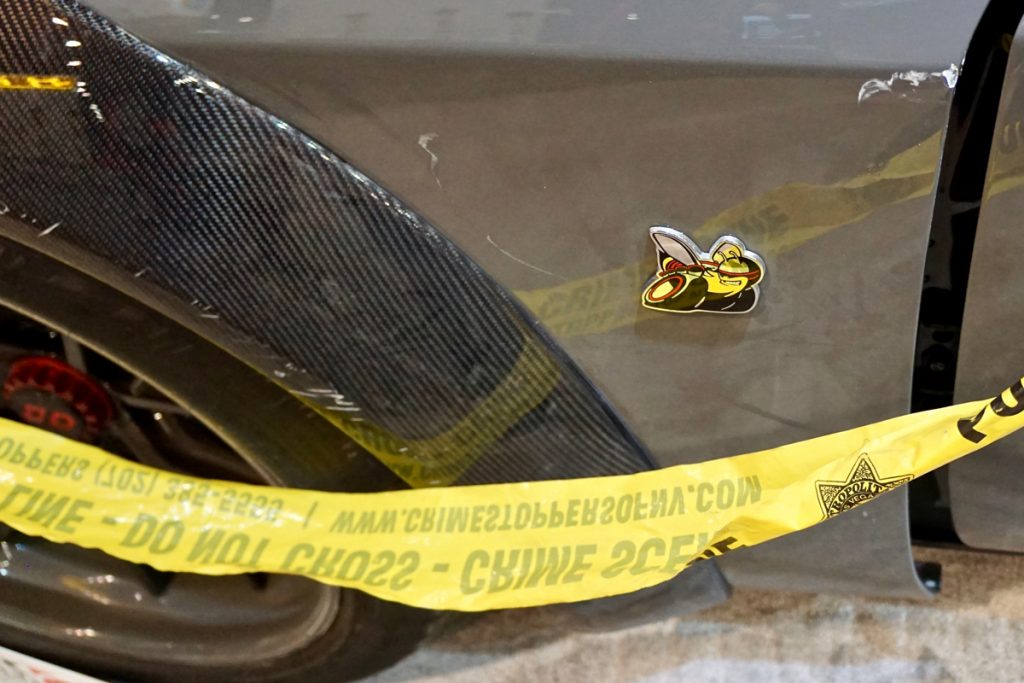 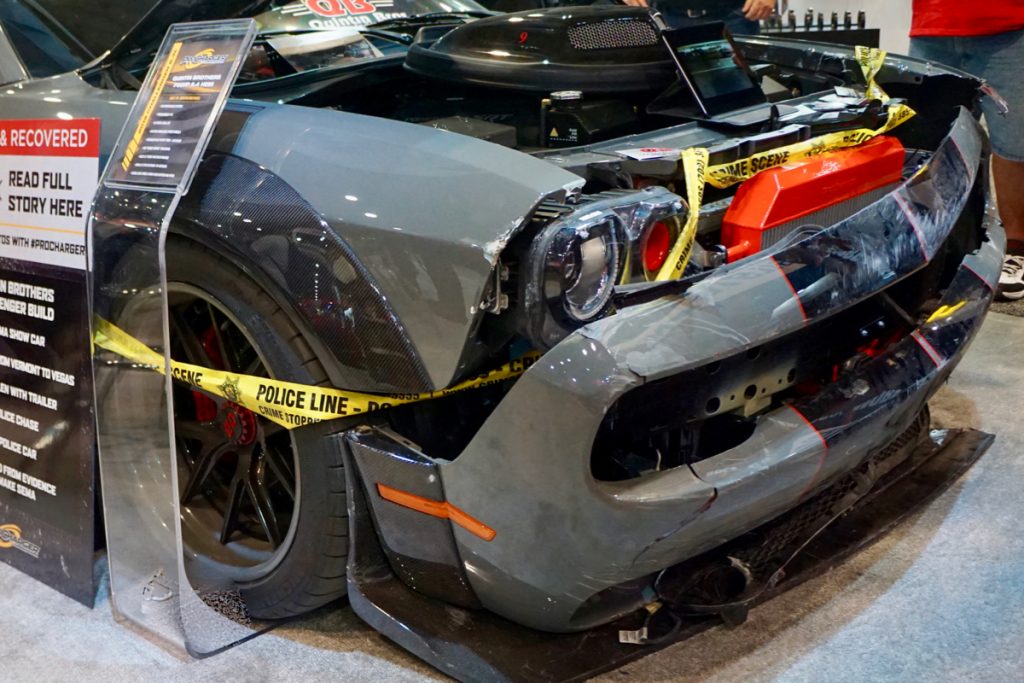 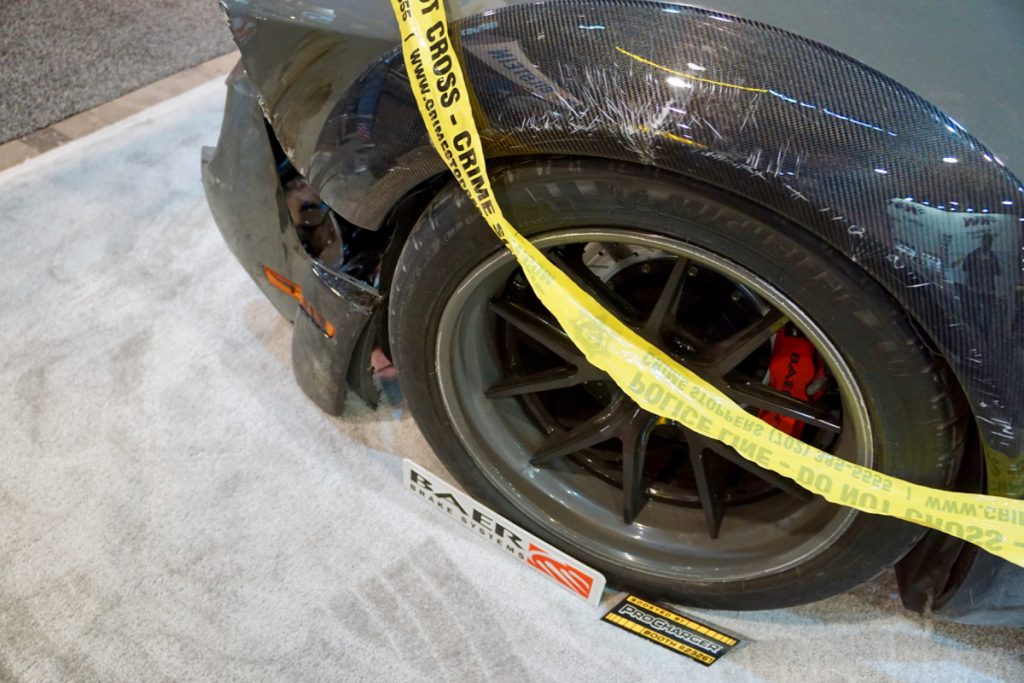 The battered beauty even participated in the SEMA cruise with Las Vegas’ finest in tow. Truly an unbelievable story that luckily ended well. I think the ProCharger booth saw more action than ever before thanks to this mangled Mopar. The Quintin Brothers were the talk of the show. The new owner will have to wait just a little longer but he will get his famous beauty back in one piece.

Thanks to the diligent work of the LVPD and Nevada State Troopers a violent criminal is off the streets. We know it is a he because he was apprehended on the 5th of November. Not before shooting a man at a grocery store in an unrelated incident. Hats off to those officers. Its been said many times before that you just never know what to expect at the SEMA Show but I think think story tops it all. Stolen, chased, released from evidence and on display at the SEMA Show in less than a week. Unbelievable! 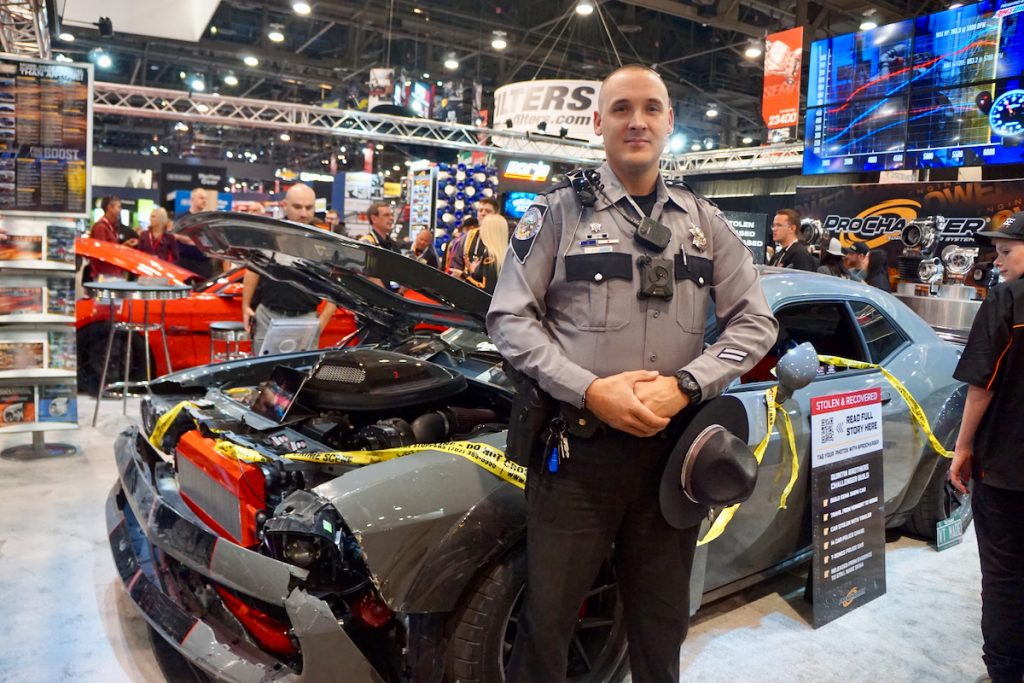 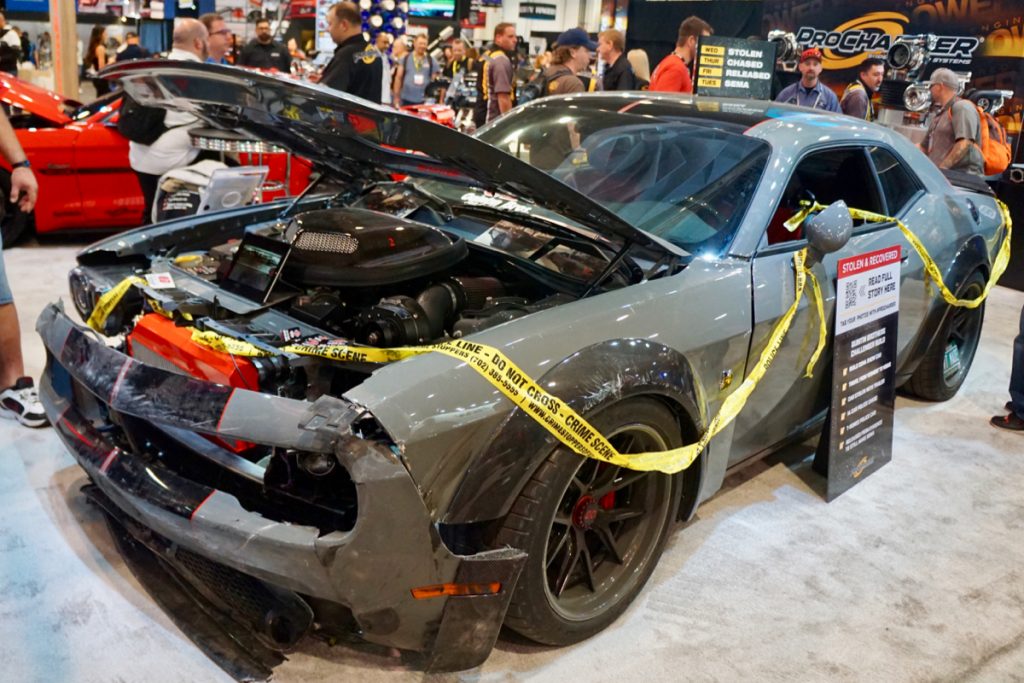 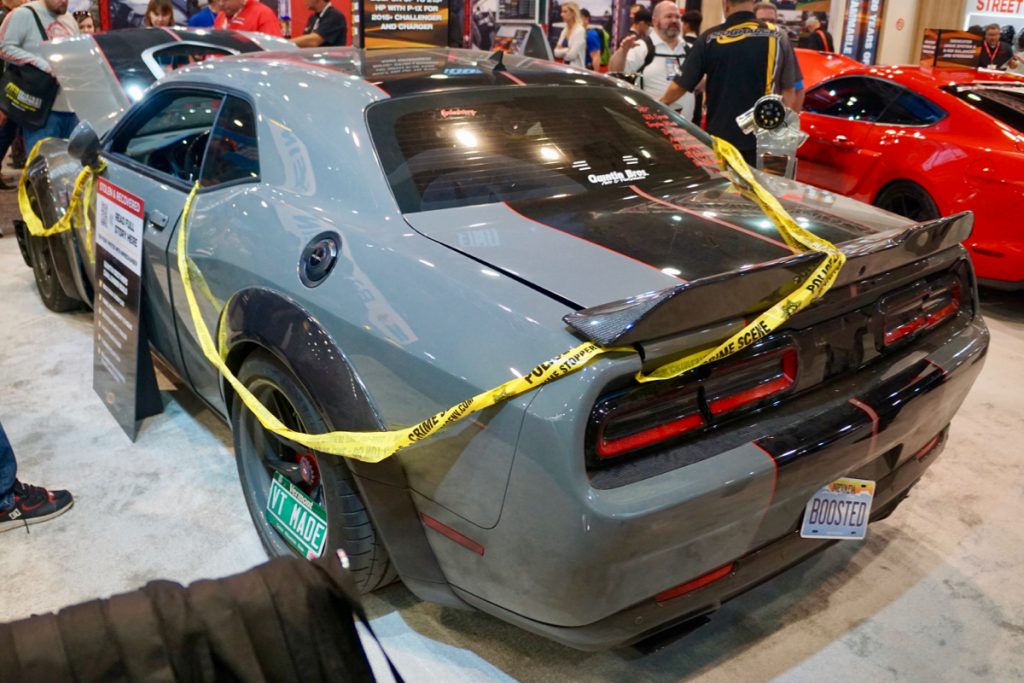 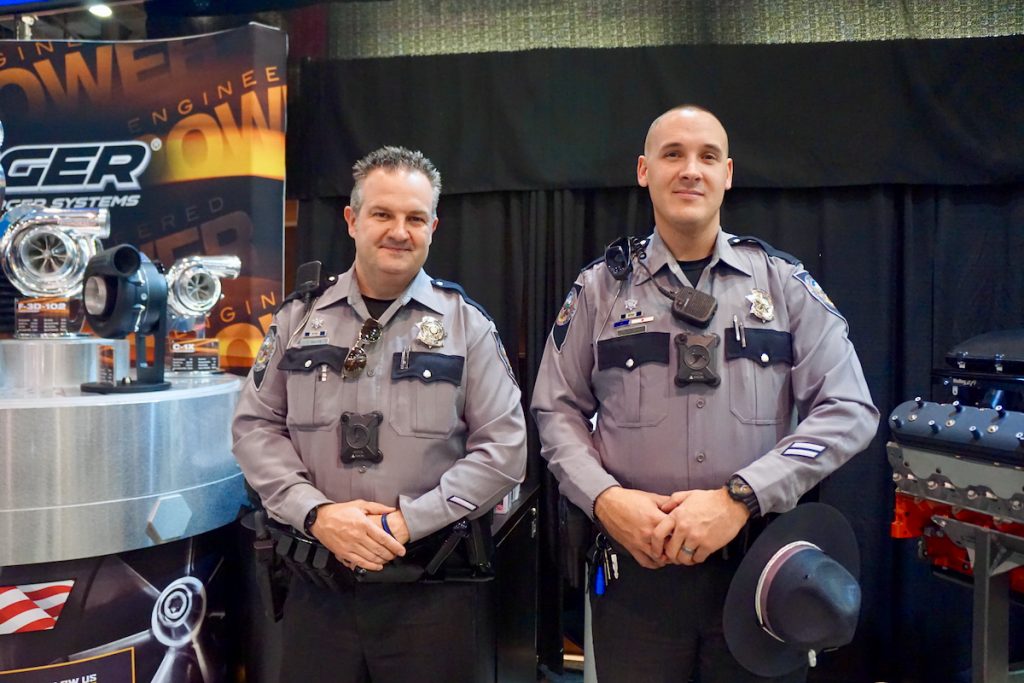 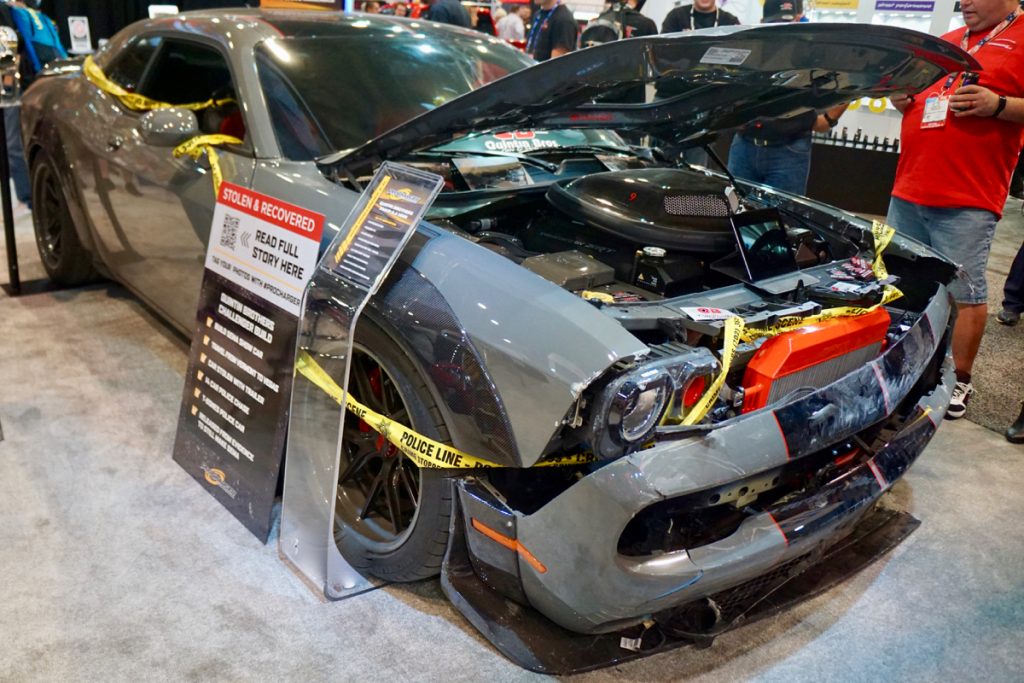 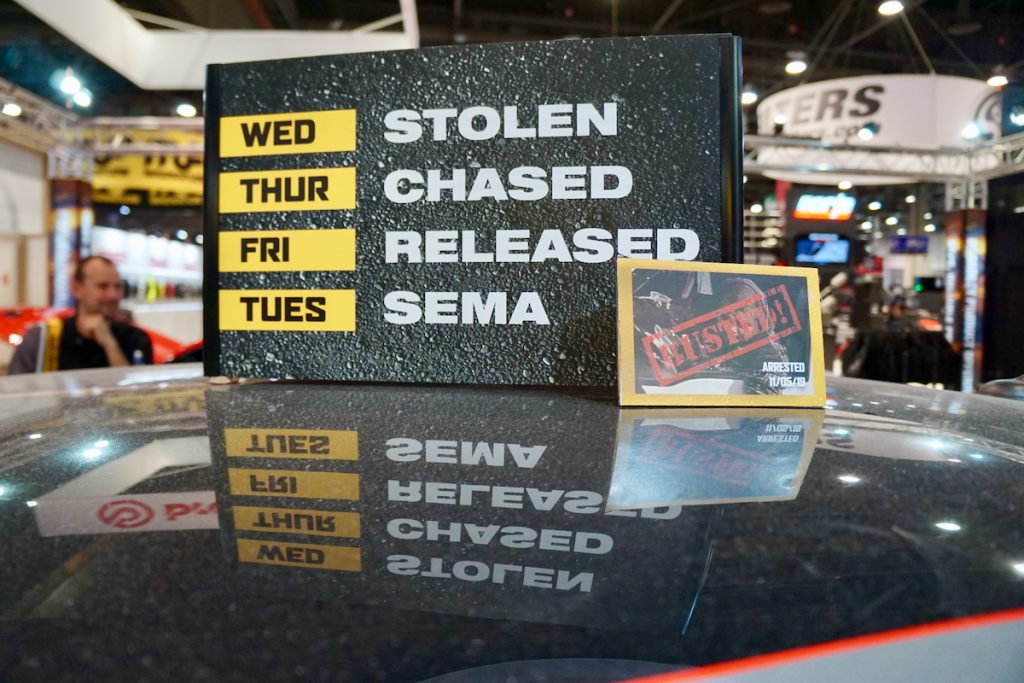 Till the next time – Keep on Kruzin