Who says the Emperor needs new clothes!  This Custom Cruiser is as relevant today as it was nearly 60 years ago. The genesis for the ’29 Ford Roadster dubbed the Emperor was quite simple. Chuck Krikorian was a gear head through and through.  After helping his brother-in-law Richard Peters build the iconic Ala Kart and watching said Ala Kart win back to back America’s Most Beautiful Roadster Awards, Mr. Krikorian thought he would like to get into the game.

Krikorian can proudly take credit for the Emperor’s stout foundation and impressive mill. To start with, Chuck channeled the body a full 8 inches.  He then built the chassis with a boxed and “Z’d” Model A frame.  Fabricated cross members with a dropped tubular ’39 Ford axle in the front and a Halibrand quick-change in the rear round out the drive train.  Wanting a “real” hot rod, Chuck built a 406ci ’57 Cadillac.  Jahns pistons, Herbert cam and kit, Vertex magneto and 6 Stromberg 97 Carbs finished the dressing on the powerplant.  The block and heads were painted white and everything else including the frame was chromed. 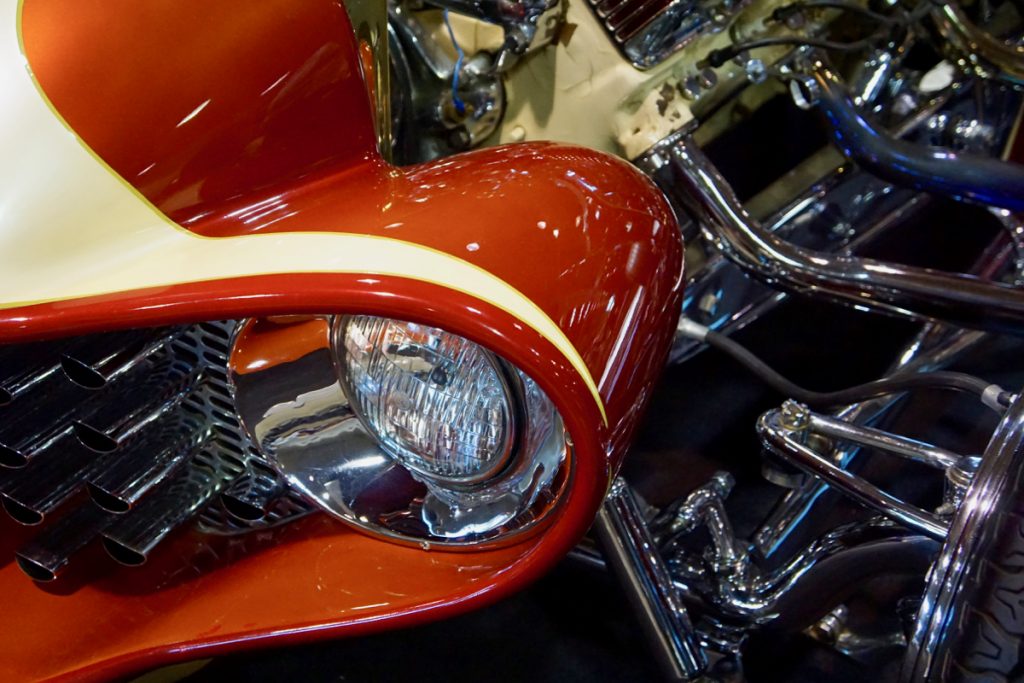 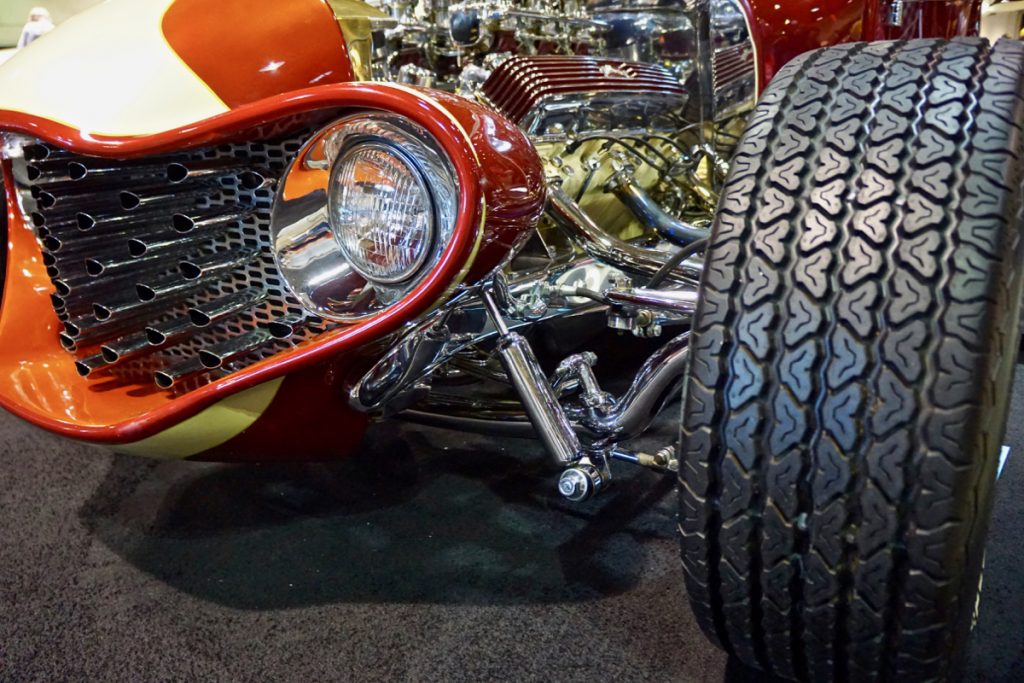 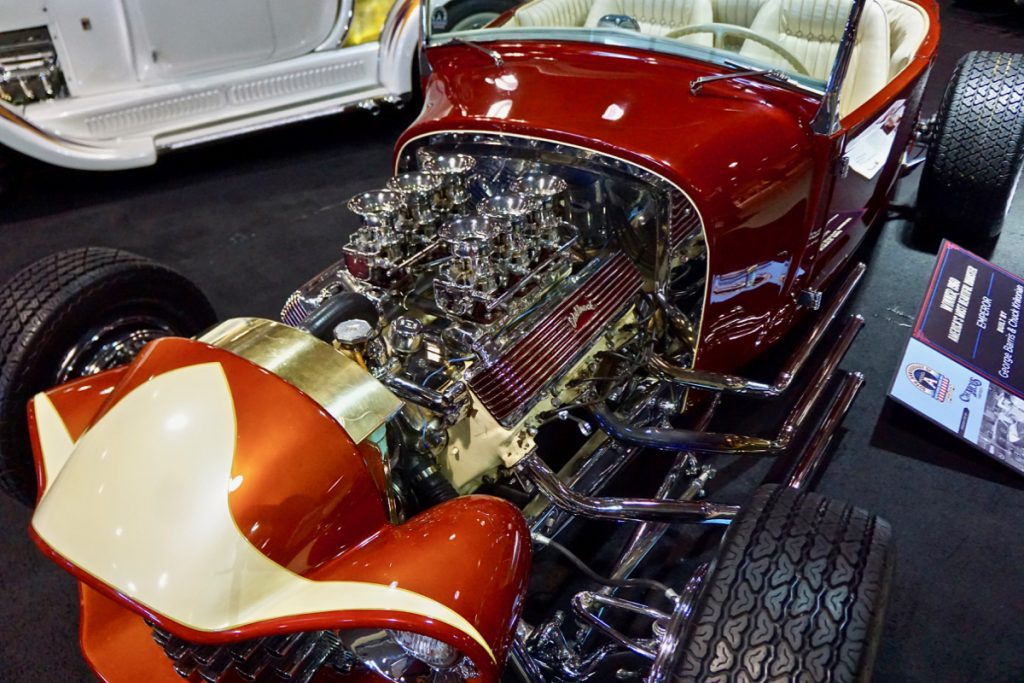 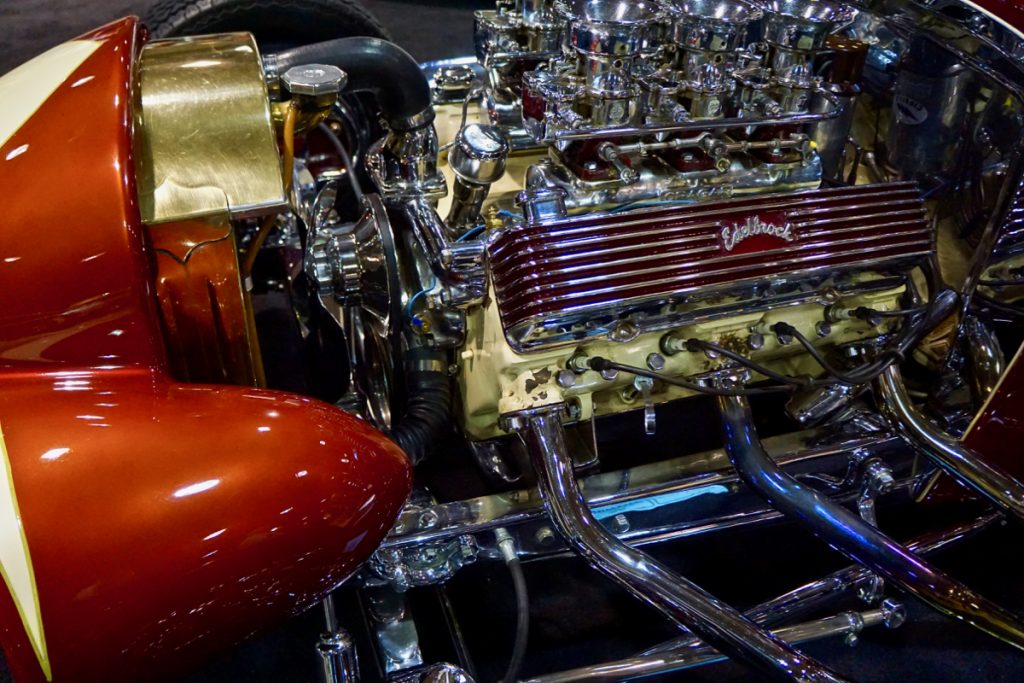 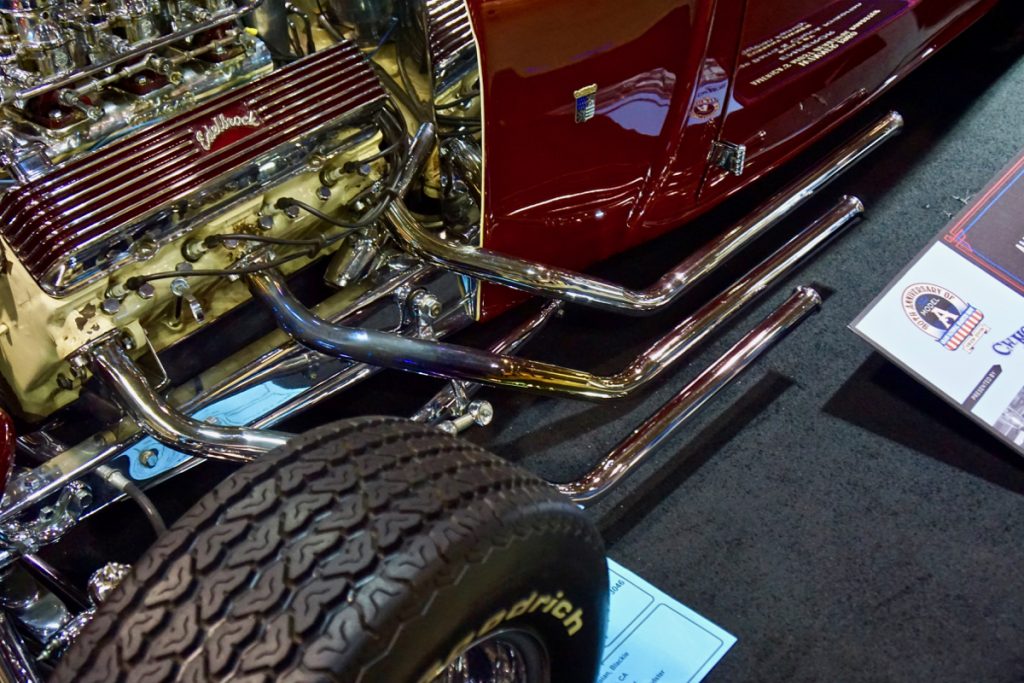 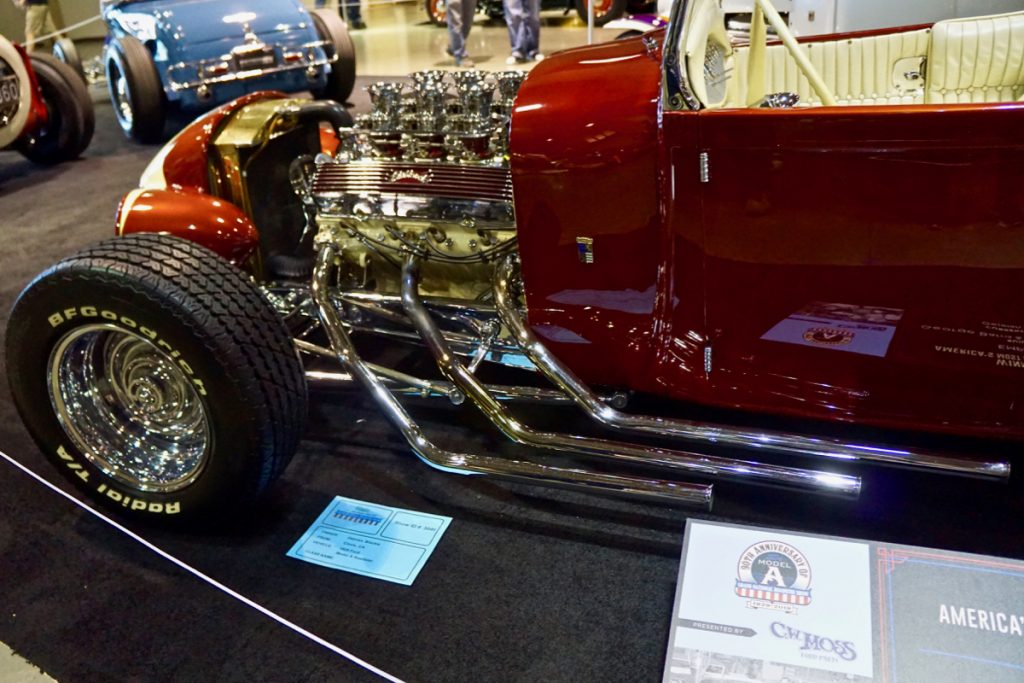 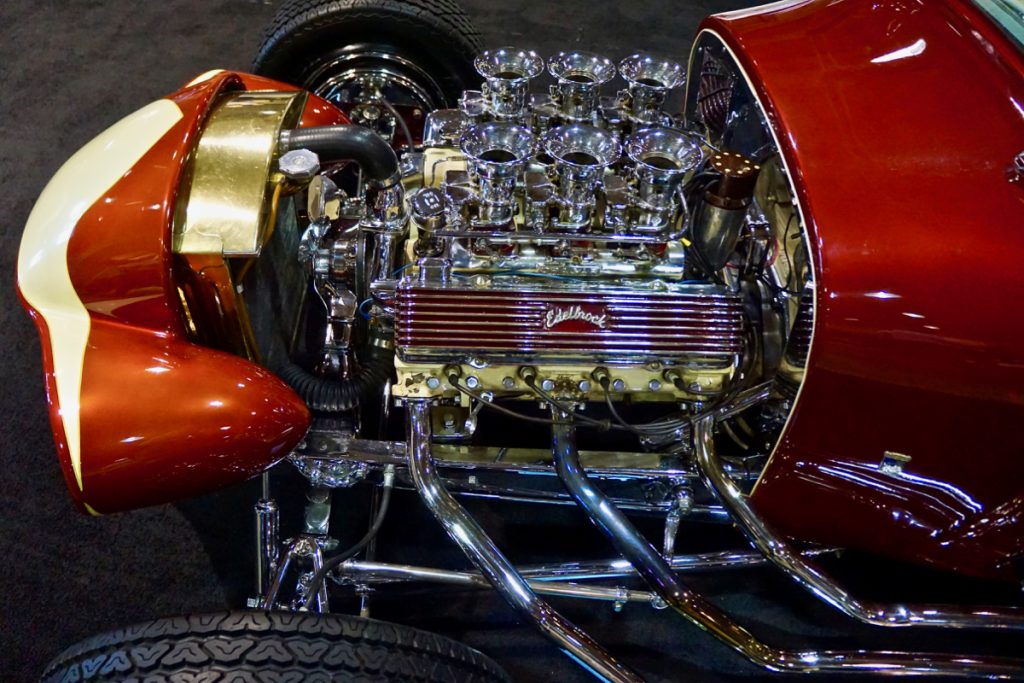 With both chrome work and engine building finished, Chuck followed in his brother-in-law’s footsteps (Mr. Ala Kart) and put his handiwork in the capable hands of George Barris where he worked his “Kustom Magik” radically redesigning the roadster. Mr. Barris fabricated the nose piece, grille, deck lid and rear pan. The rear grille which mirrors the front was fitted with ’59 Pontiac tail lights.  The rear roll pan was louvered and contoured around the quick-change.  All corners were rounded and the body creases were molded. Motorcycle fenders covered the pizza cutters in the front and it rode on wide whites in the rear.  Barris also applied the original paint but a master cylinder malfunction necessitated a new paint job shortly after the Emperor’s debut.  The car was repainted at Barris, however this time Junior Conway put down the final coat.  This remains the oldest Junior Conway paint job around. 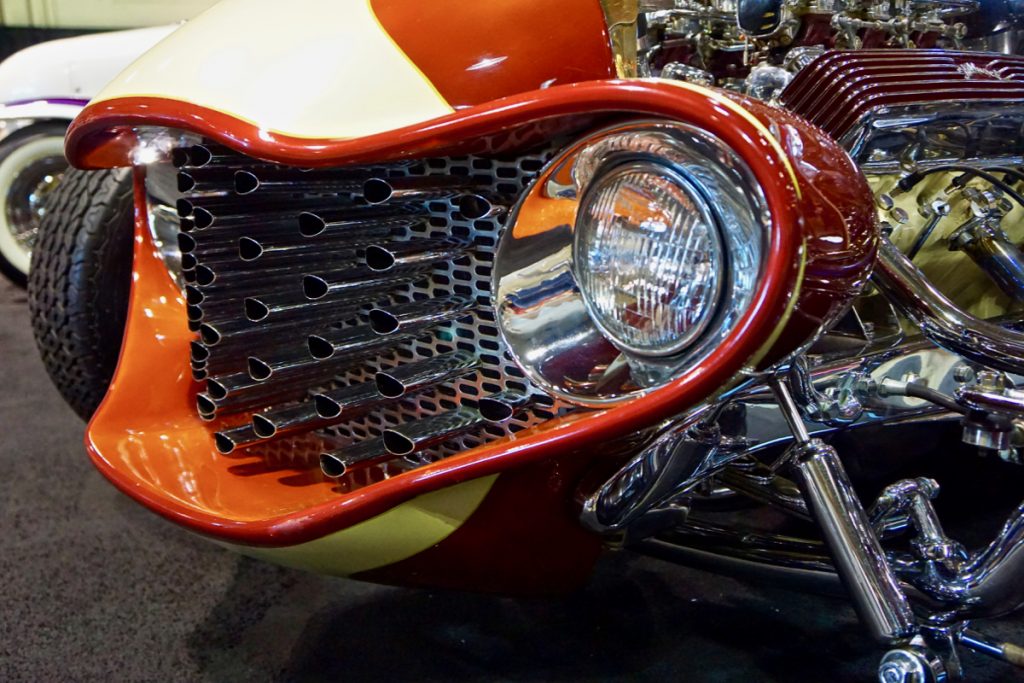 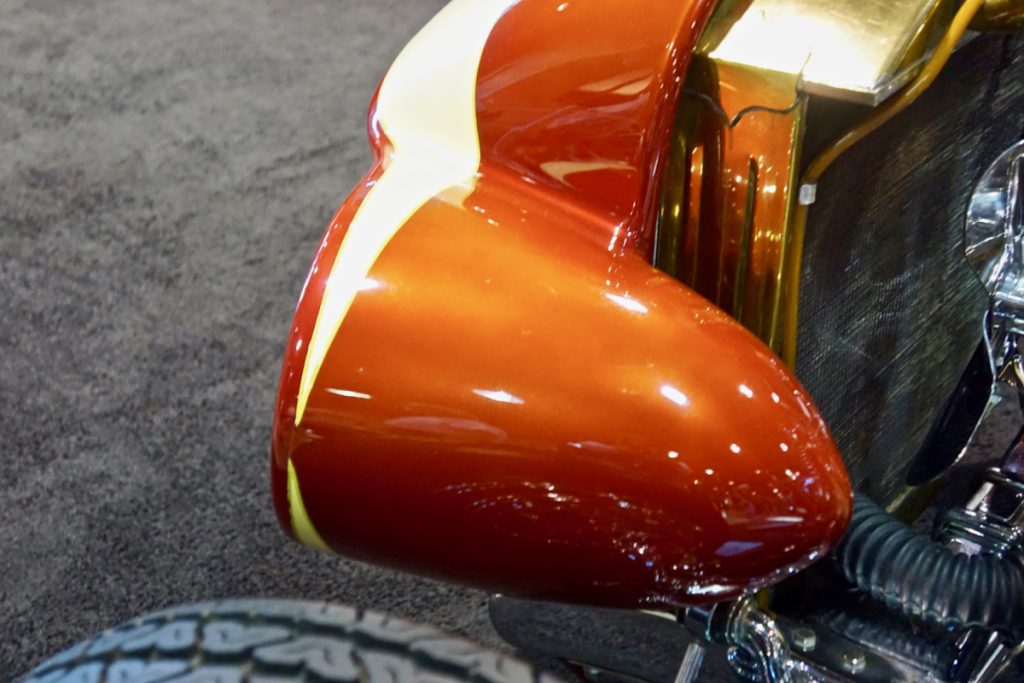 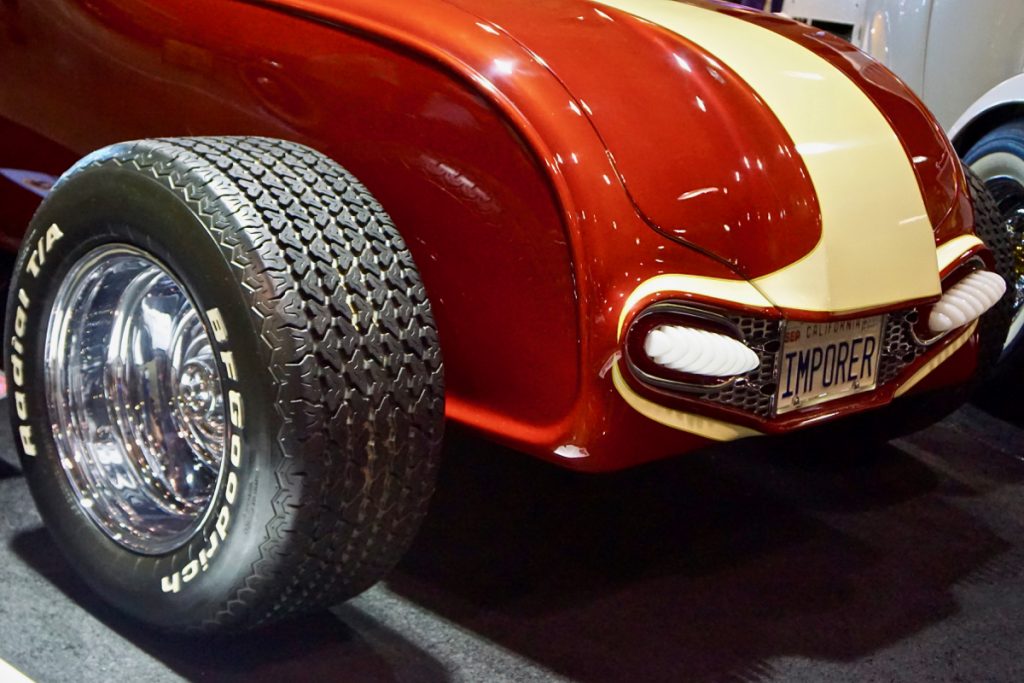 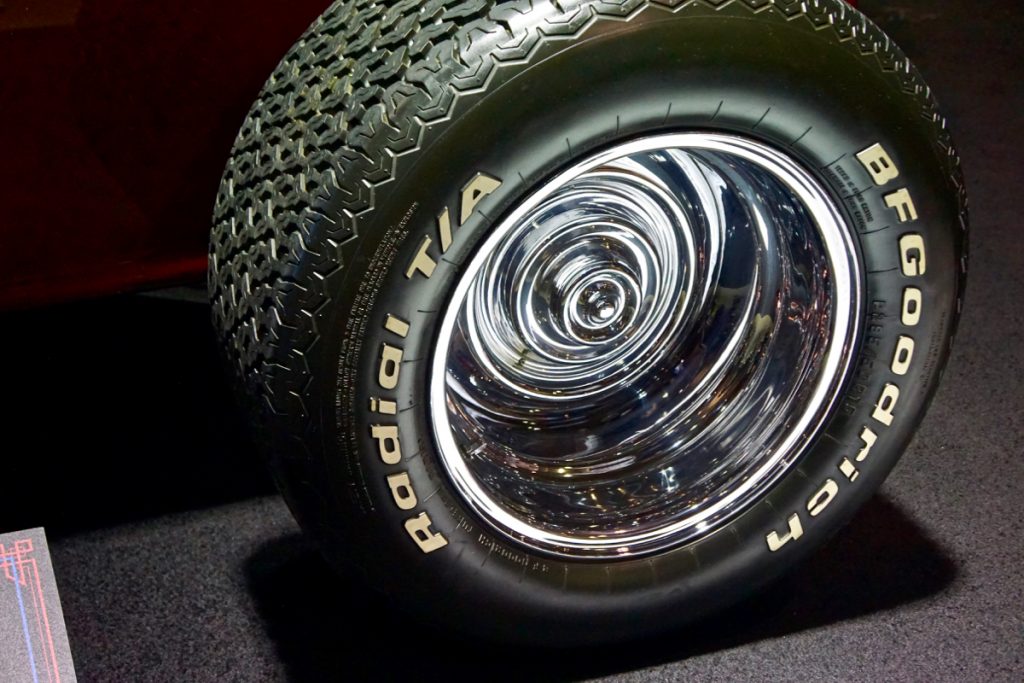 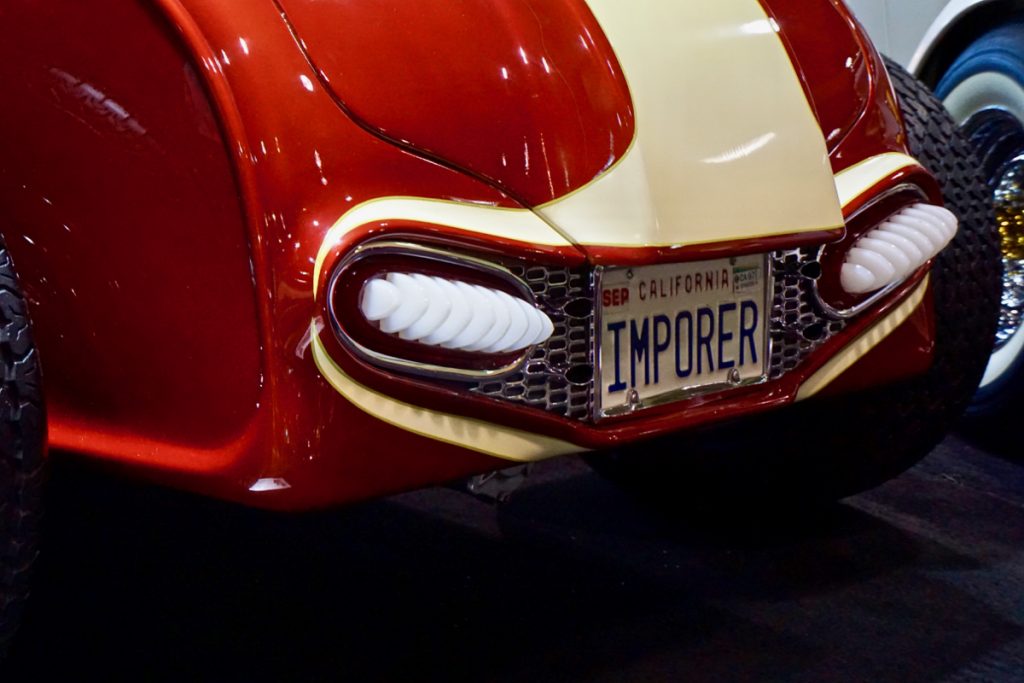 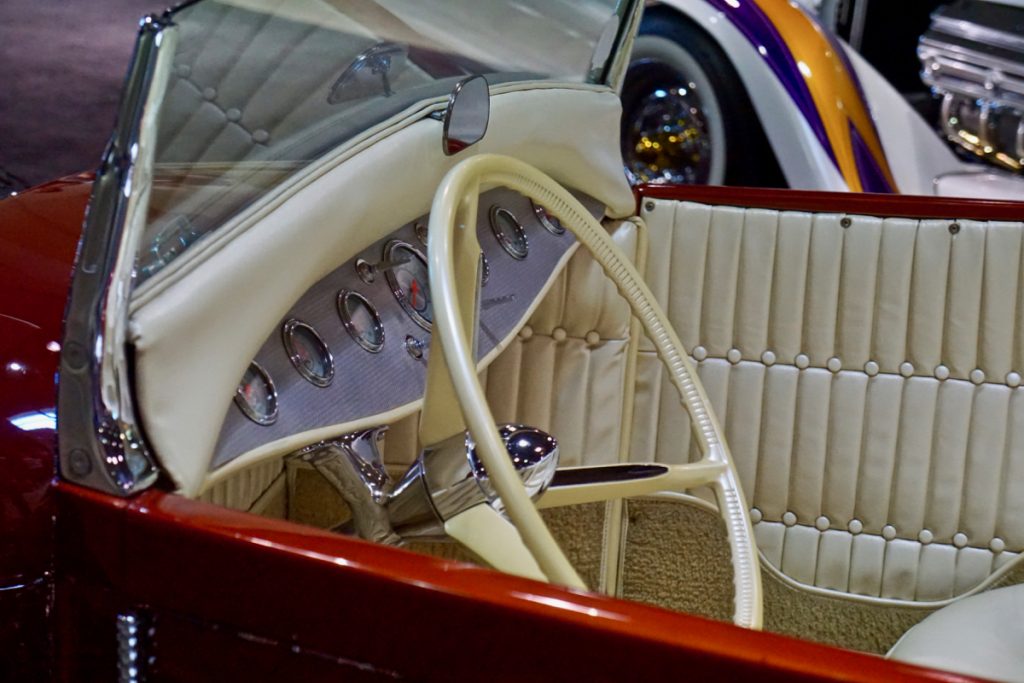 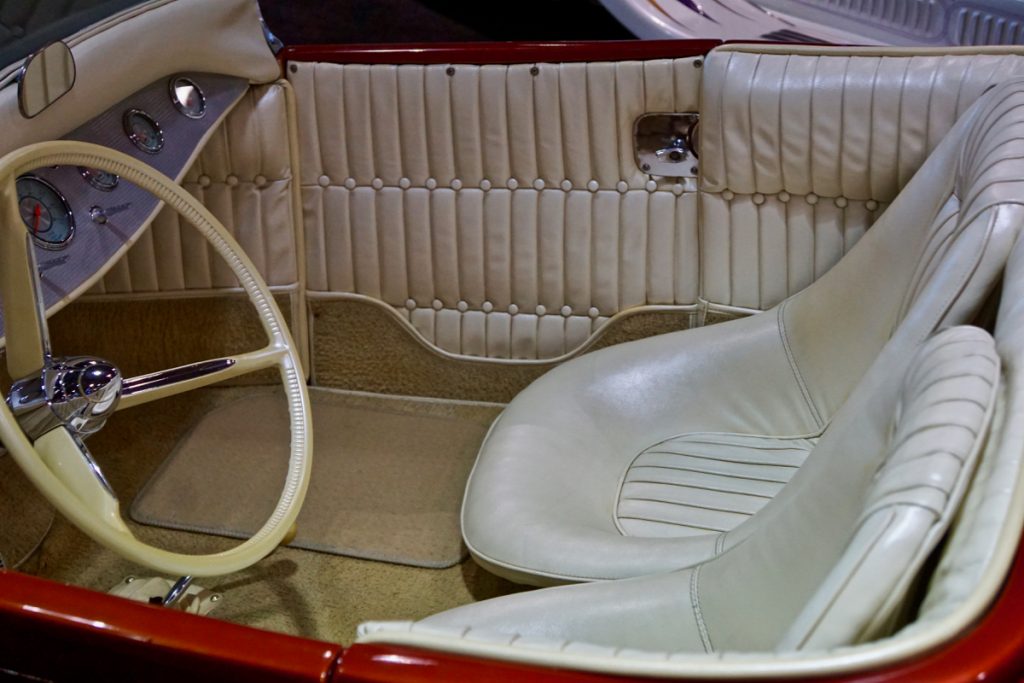 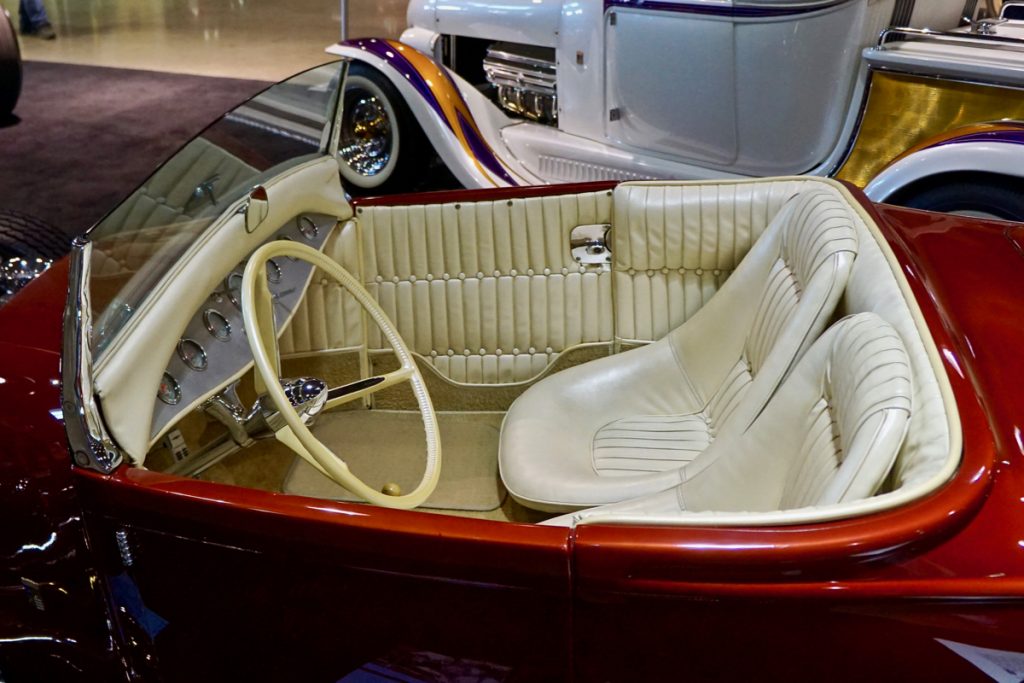 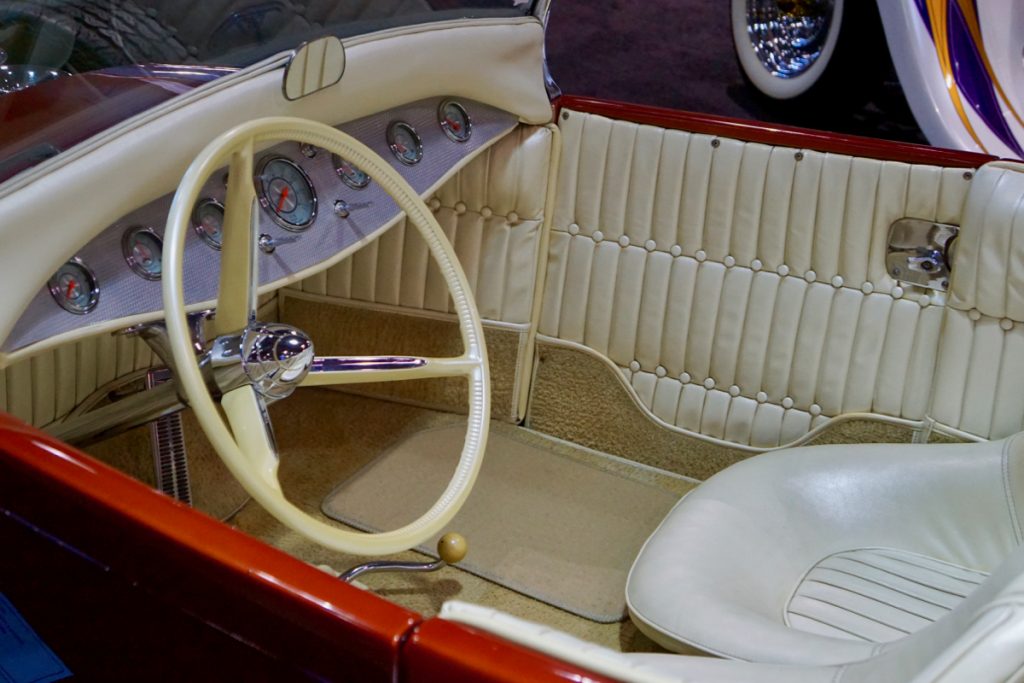 Mr. Krikorian remained the curator of the Emperor into the 1980’s.  He sold it to a close friend Blackie Gejeian with the caveat that he must keep it completely original. Clearly the Emperor has been in good hands and for the most part is time-vault authentic. Lucky for us, the Emperor was sitting pretty at this year’s Grand National Roadster Show.  It was part of the display in Building No. 9 devoted solely to the Model A.  Appropriately parked next to Ala Kart it was among an impressive number of past AMBR winners, part of a display of true hot rodding history. 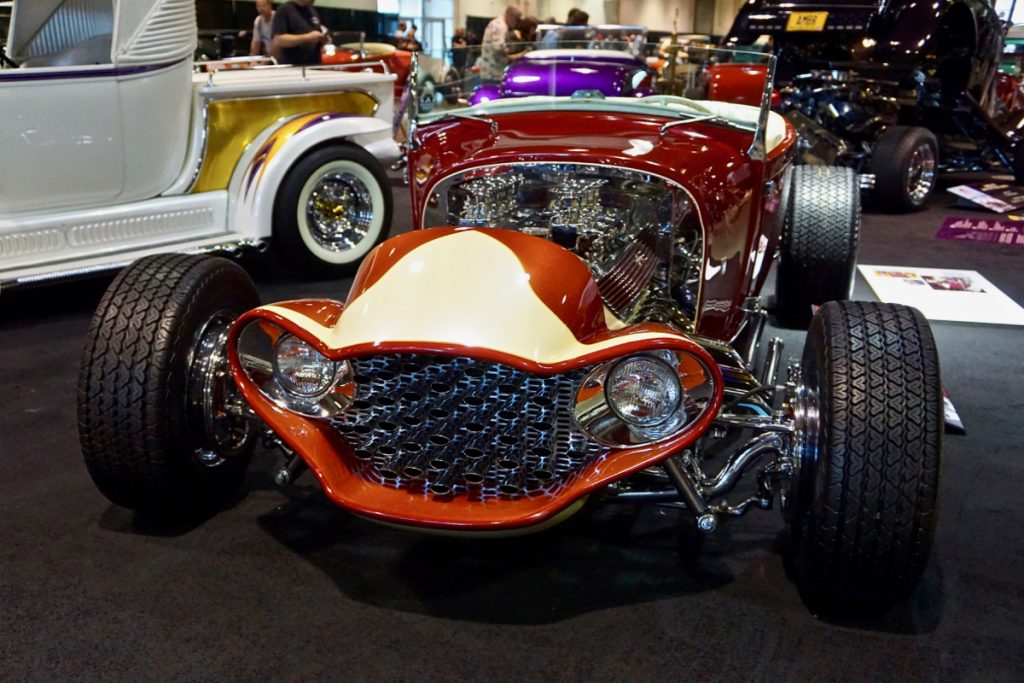 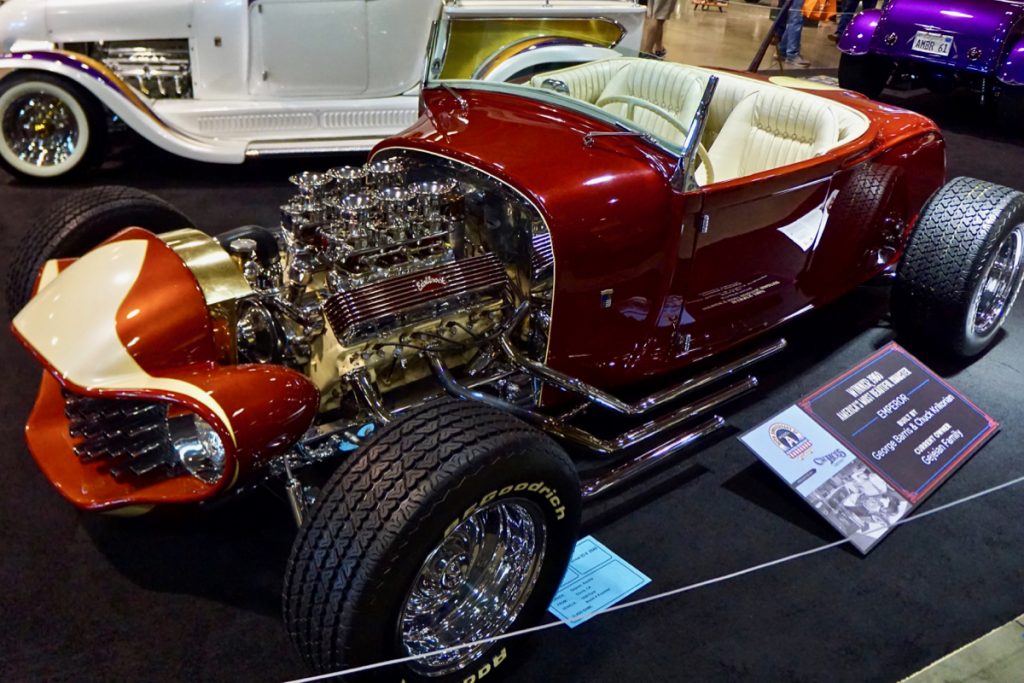 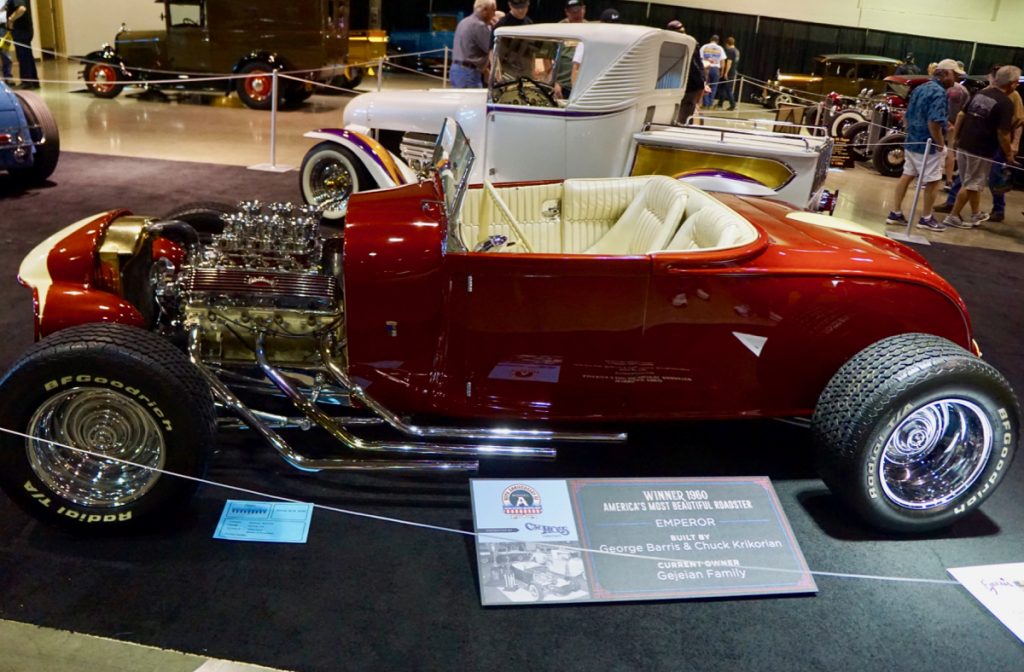 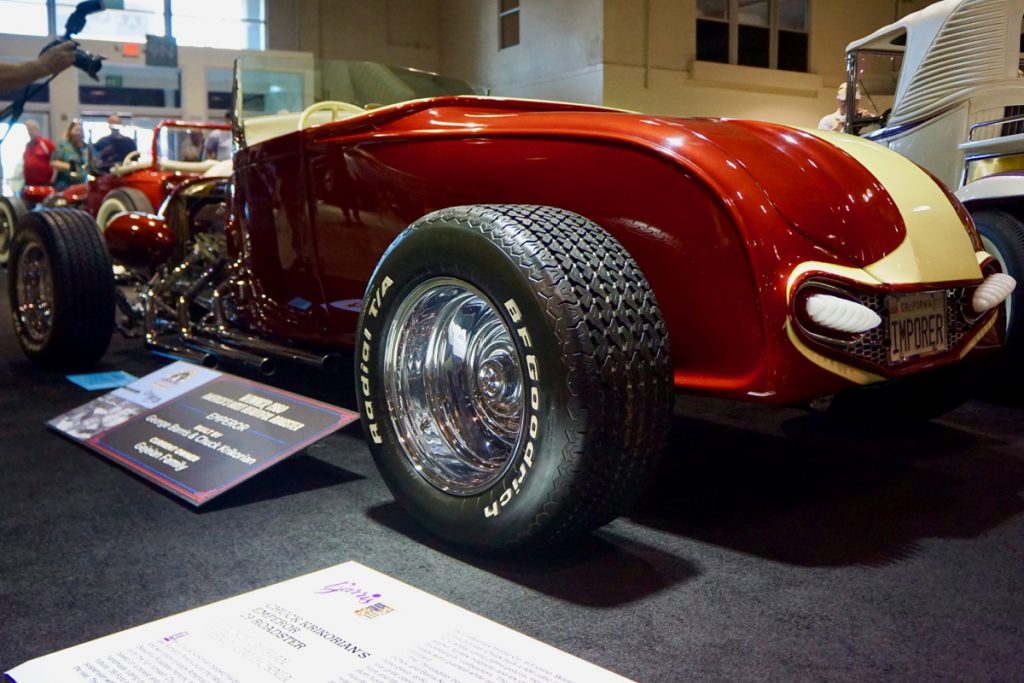 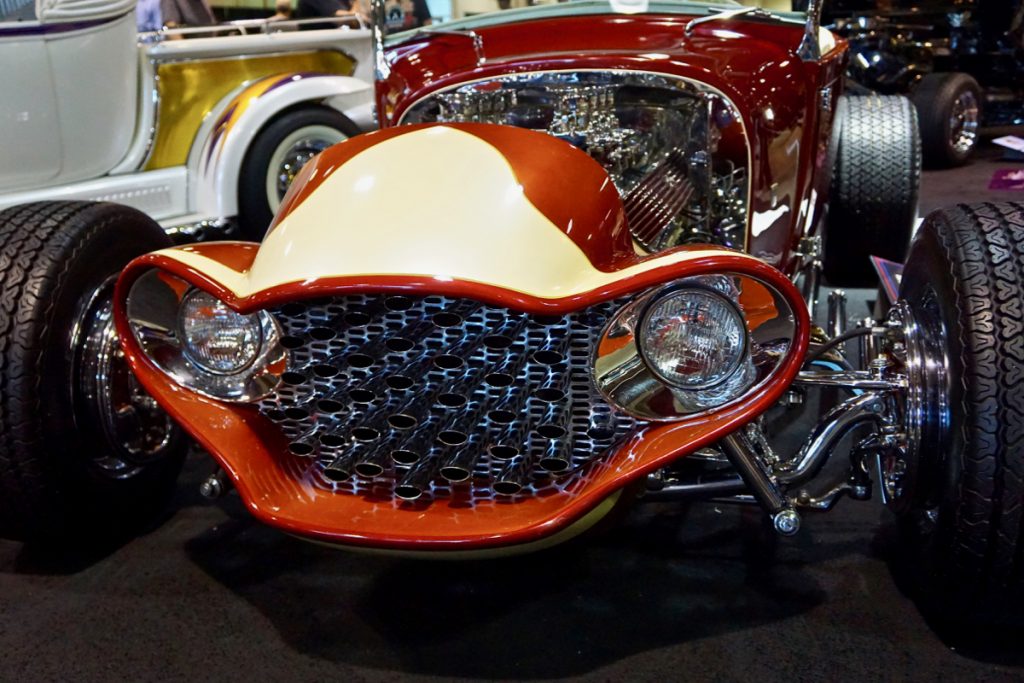 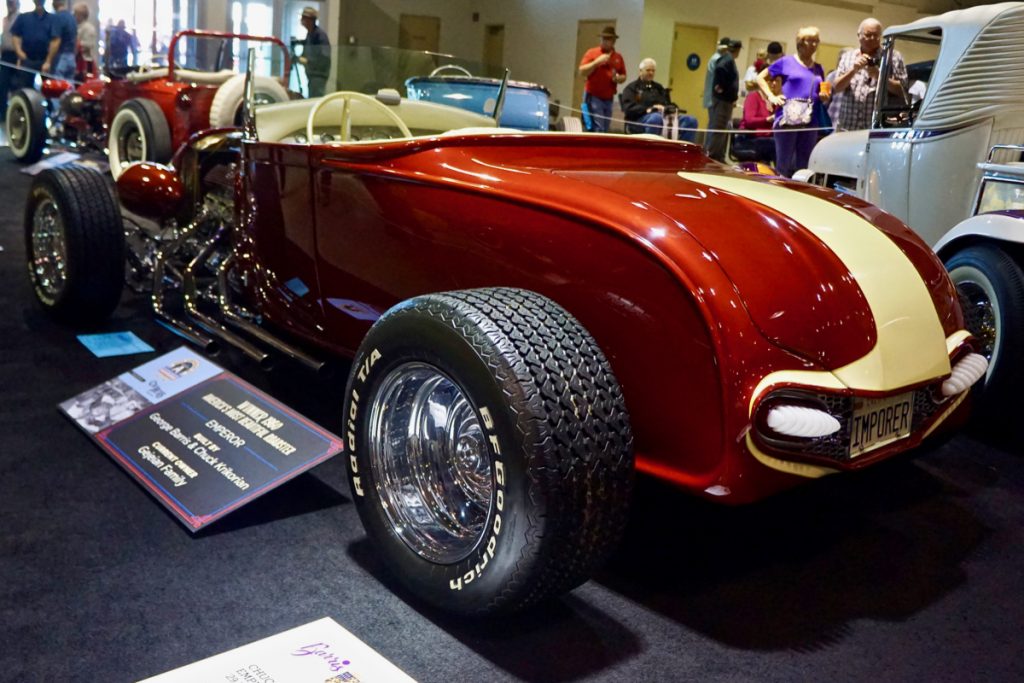 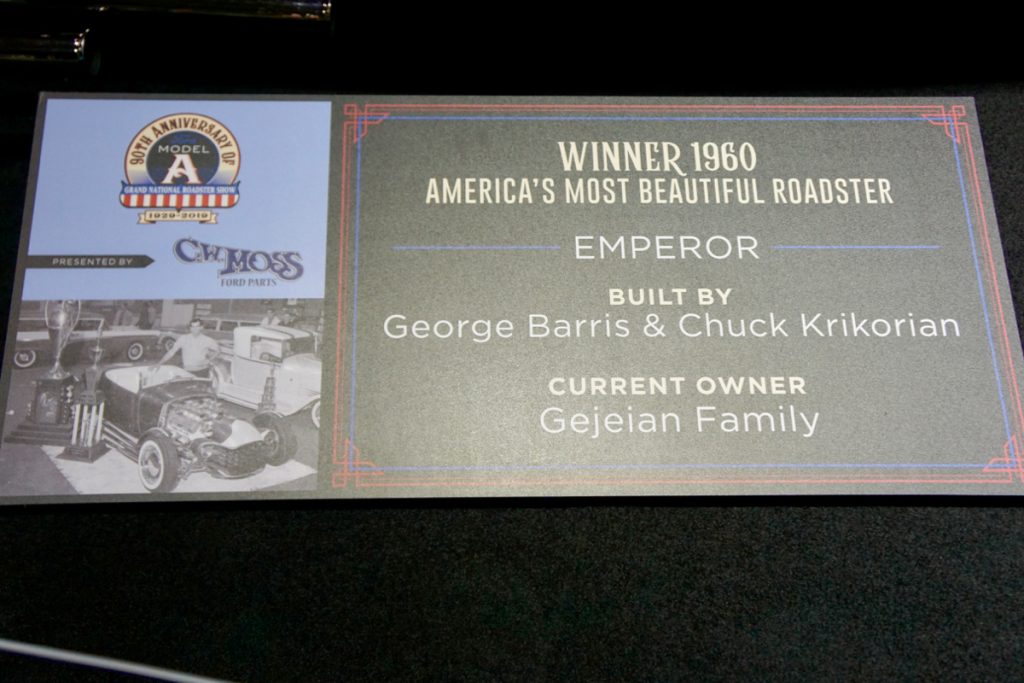 Cast your peepers at some historical pics (photos courtesy of the internet) and you can see that the Emperor is virtually identical to the days when it first made the rounds. Although there are some changes, they are few.

For some unknown reason, Chuck sold the tires and rims when the Emperor went into hibernation in the 60’s. And according to Gejeian, the Motorcycle fenders were so heavy that they would vibrate and snap the mounting brackets so they were never reinstalled. The chrome is still all original and is in remarkably good shape. The blue headers are evidence that the car not only runs, but runs well. Well enough to have done 106 mph in the quarter-mile at the old Kingdom Dragstrip with Blackie at the wheel. He set the record for the Street Roadster Class that day, even though he also “broke” the motor. And this happened shortly after the AMBR win. 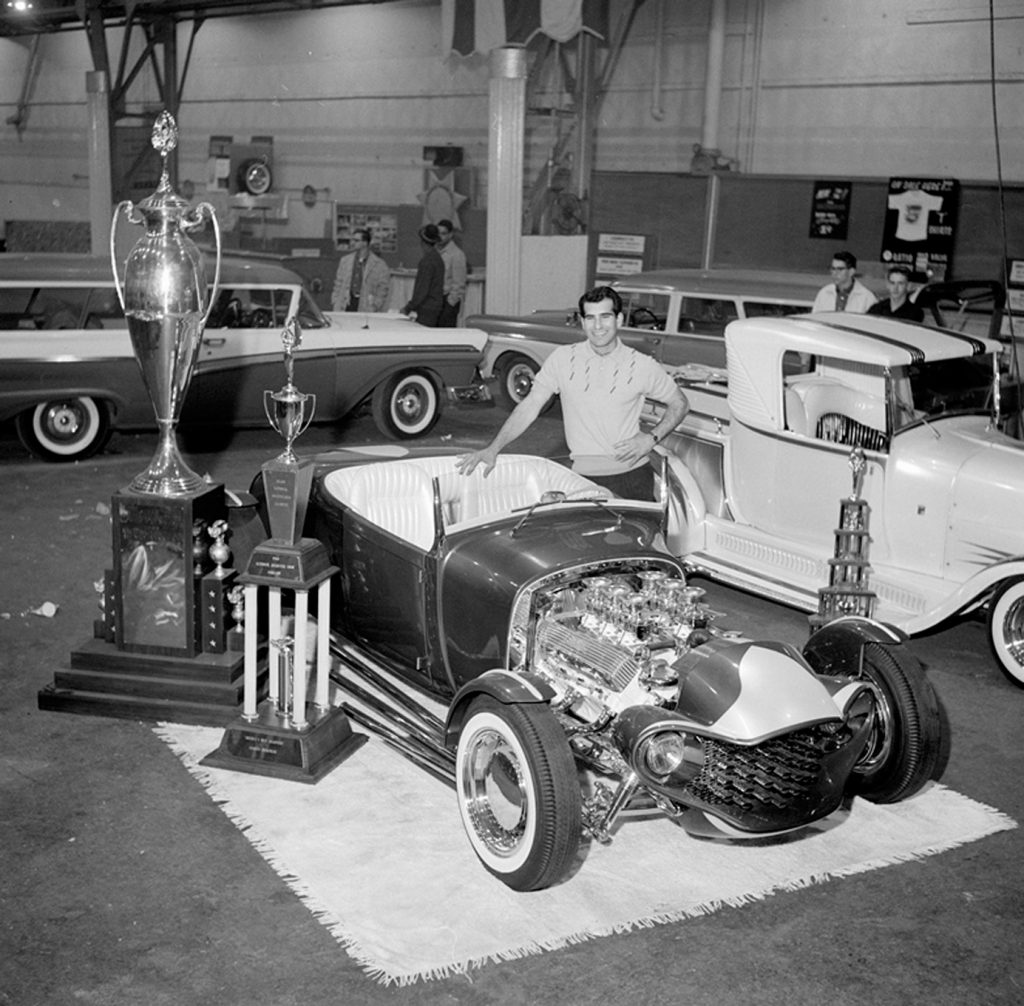 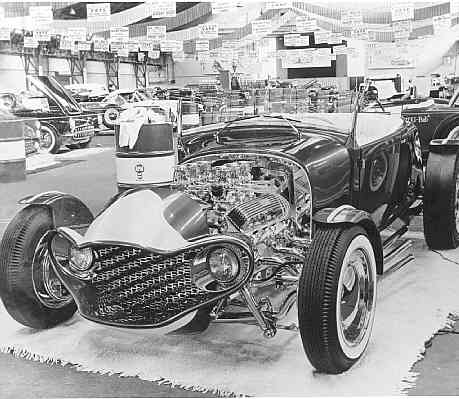 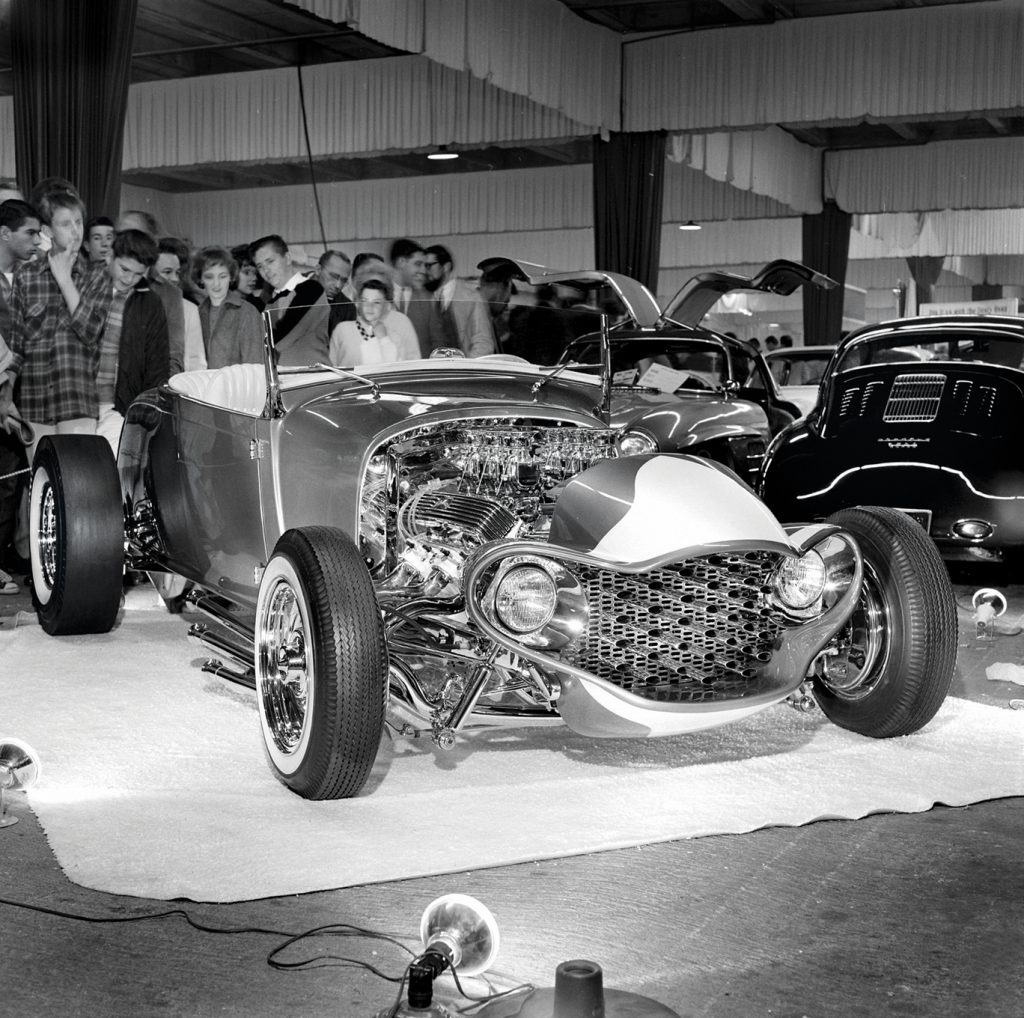 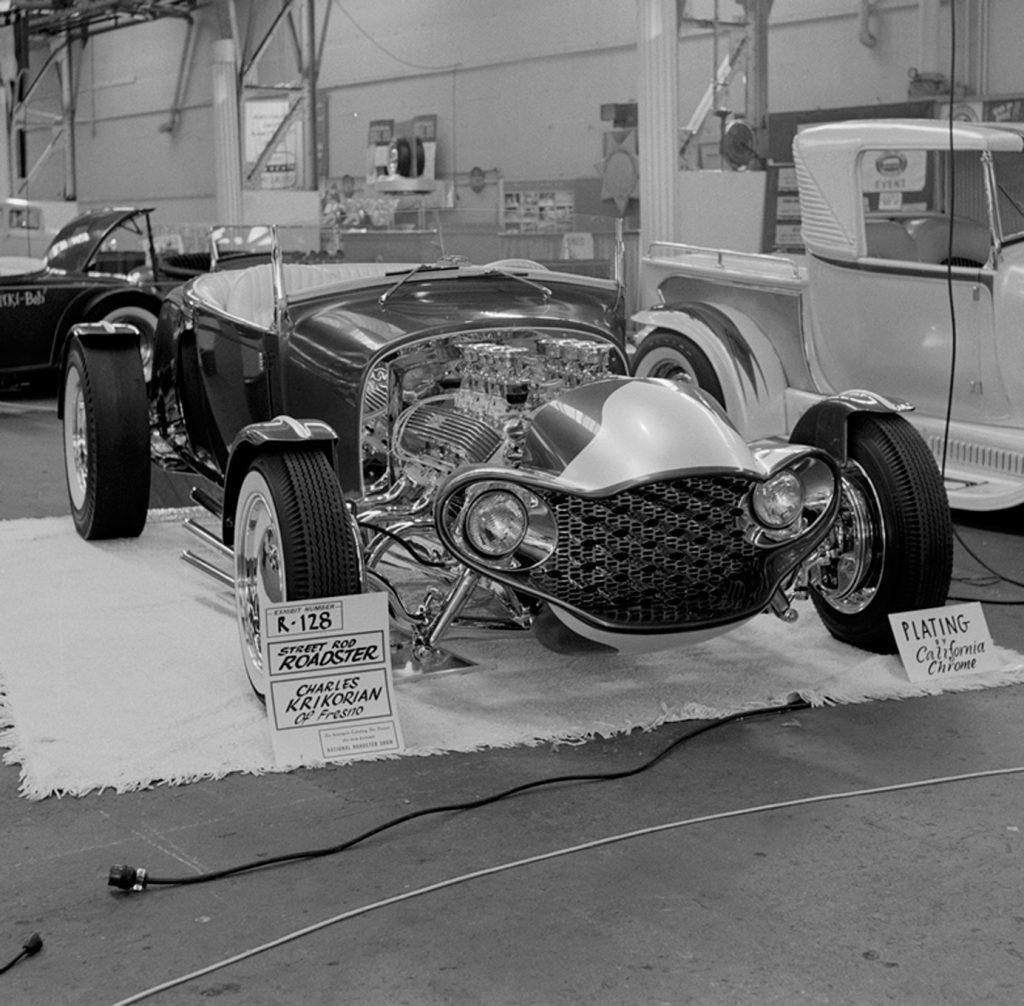 Some more Custom Candy for your viewing pleasure. This Emperor looks fine in his old clothes.

Does this Custom Cruiser float your boat?  Hop on our mailing list and you won’t miss a single Show Stopper.