How about this for a quarter mile monster.  Dare I say it might just be the Mother of all Dragsters?  I saw this “Mother” at the Duck Tail Run in Gas City, Indiana.  And as I stood there gaping at this beast, about a thousand questions went running through my head.  Like, if I had the chance, would I have the guts to strap in and take it for a quarter mile rip?  Who was behind this?  And just what was I looking at?  After a bit of research, I got the skinny on this Dragster with a capital D.  It was the brainchild of the “Power Crazed Genius” and 60’s drag racing phenom Jim Lytle.  Depending on who you ask this beast is called either “The Big Al 4” or “Quad Al”.  Whatever its name, I call it insane and was happy as all get out that I able to see it up close and personal!

Mr. “Power Crazed Genius” Jim Lytle, was famous throughout the 60’s drag racing scene for creating radical dragsters stuffed with Allison aircraft engines. What I laid mine eyes on was one of his most infamous creations.  It was listed in the 1974 Guinness Book of World Records as the “most powerful piston engine car ever built”.  Rumor had it that this 8 wheeled wonder came in at an incredible  6,840 cubic inches.  It would turn 12,000hp with 10,000ft lbs of torque which came screaming out of 96 exhaust pipes.  All those raging horses were courtesy of the four WWII era Allison V12’s.  A very intrepid reporter from DragRacingOnline tracked down Mr. Lytle several years ago and asked the burning question.  Why?

Mr. Lytle’s reply – “I was looking for another Allison project. A buddy of mine, Ron Jolliffe, made a drawing of a coupe with side-by-side Allisons, it looked pretty cool. I said, ‘Ivo’s got four engines; why don’t we?”  “The motors were the easy part,” he added. “In 1965, you could buy Allisons all day long for 50 to 150 bucks — and they made 3,000 horsepower apiece, unmodified! I only had $2,000 in that whole car, thanks to my sponsors.  Cal Automotive gave me a ’glass body and grille shell; Moon donated the tanks; Champion came up with some special, unshrouded racing plugs that were developed for Allison hydros.” 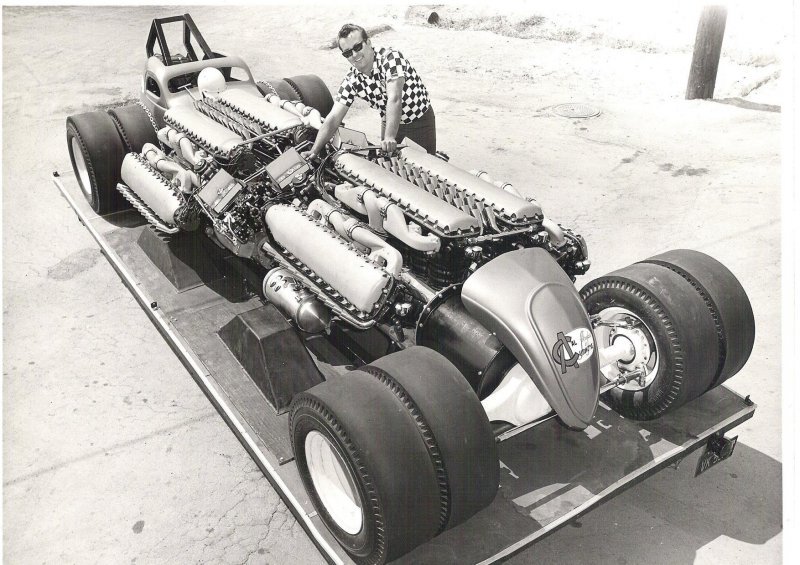 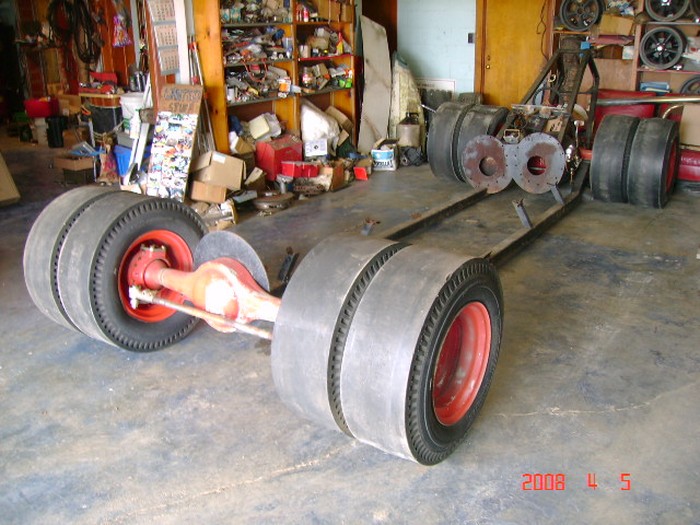 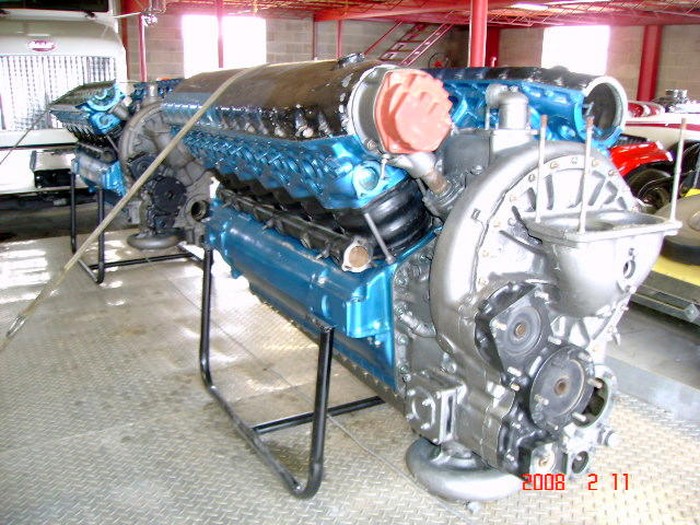 “All that was left to do was install clutches and gears.”  And that’s when the dragster progress came to a screeching halt from the whopping sticker shock.  The lowest price  Lytle could find for custom-built ring-and-pinion sets and clutch assemblies was $5,000. “I was making 110 bucks a week as a design draftsman,” he explained. “Coming up with five grand for clutches and gears was out of the question.”  Regrettably, the “Quad Al” never turned a wheel under it’s own power leaving the aforementioned stats of 12,000hp and 10,000ft. lb. of torque just that,  heartbreaking speculation.  In late 1965, Jim reluctantly accepted an offer from stuntman Tex Collins of $4,000 for the car and trailer and the “Quad Al” was sold.  Unfortunately, Tex met an untimely death before the dragster was finished.  Tex’s widow sold his cache of Allison engines as well as the dragster and off into oblivion the “Quad Al” went. 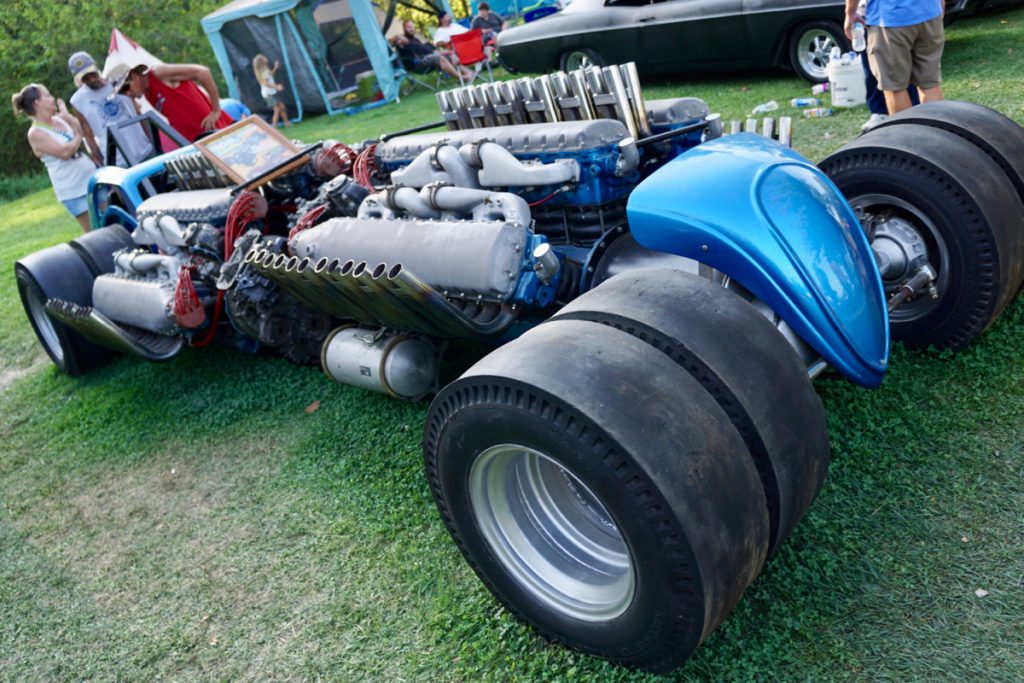 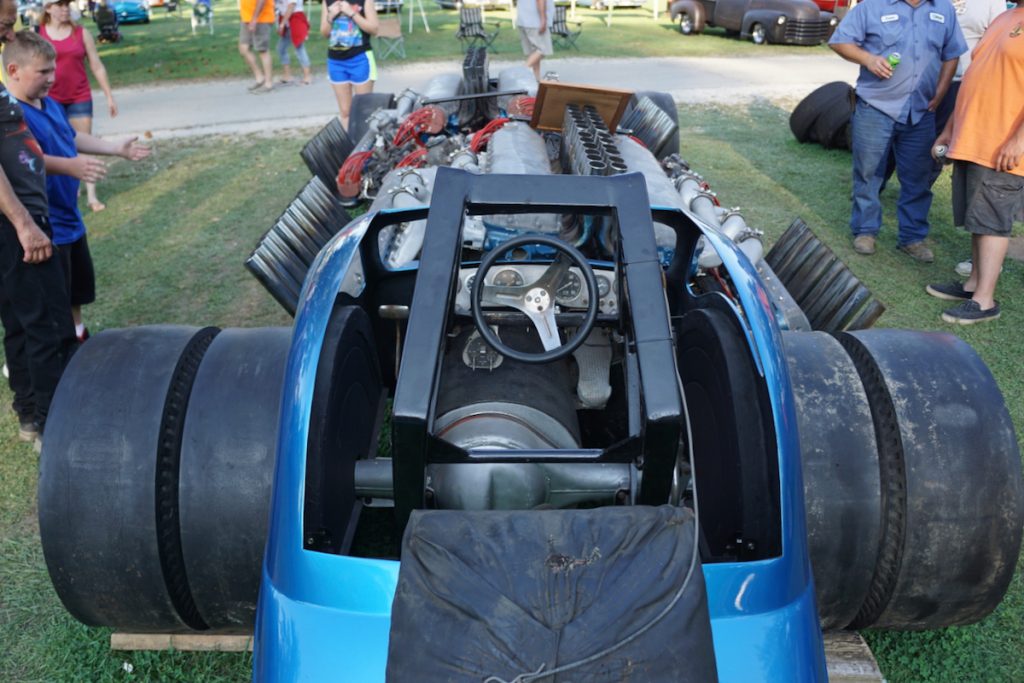 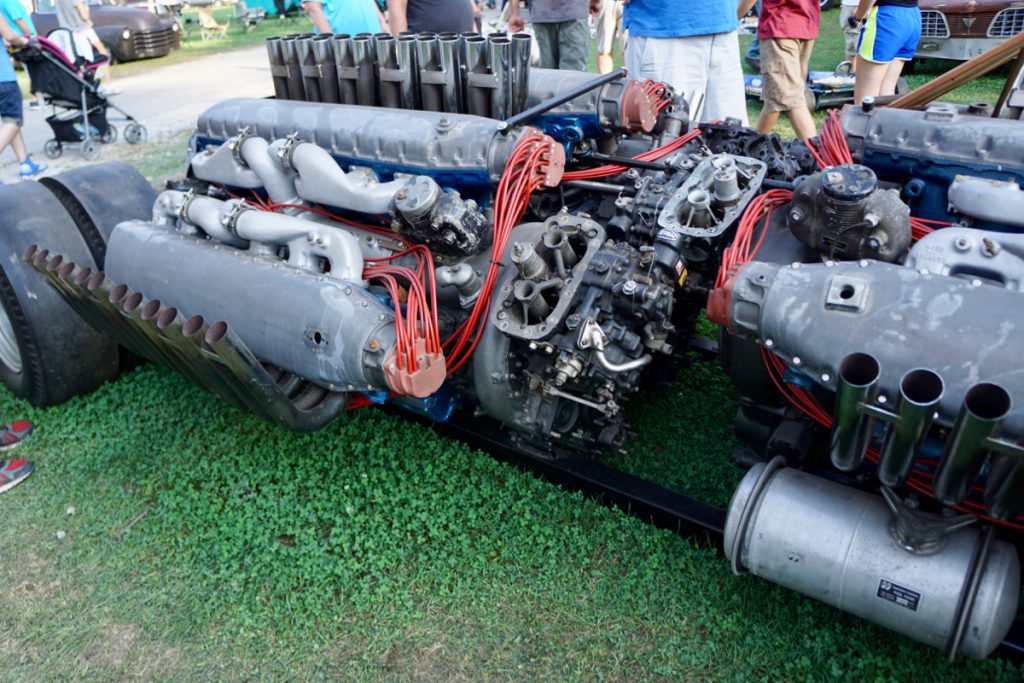 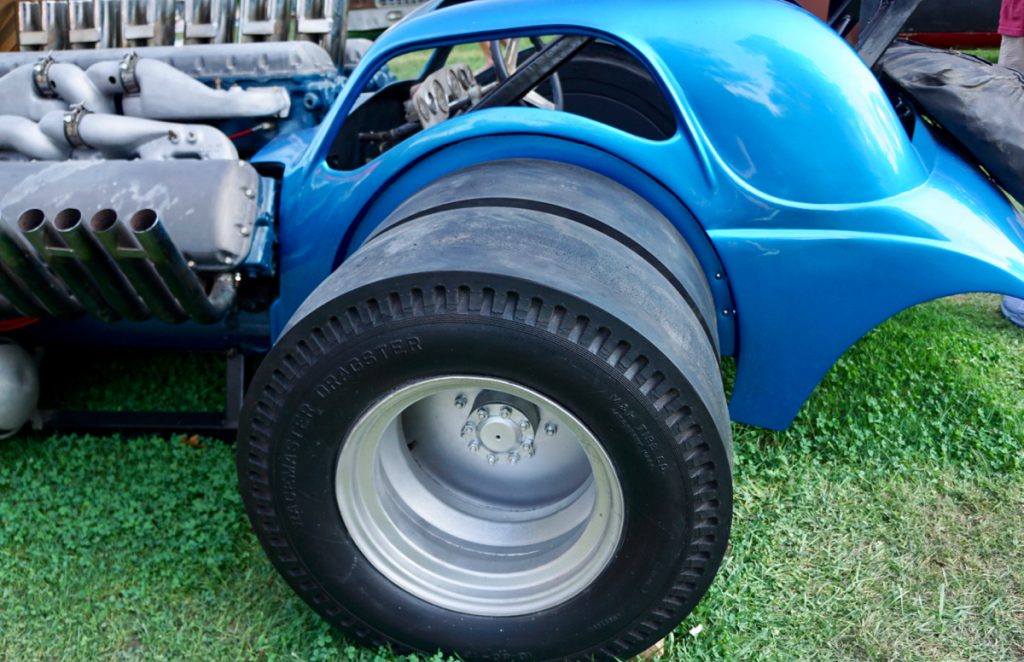 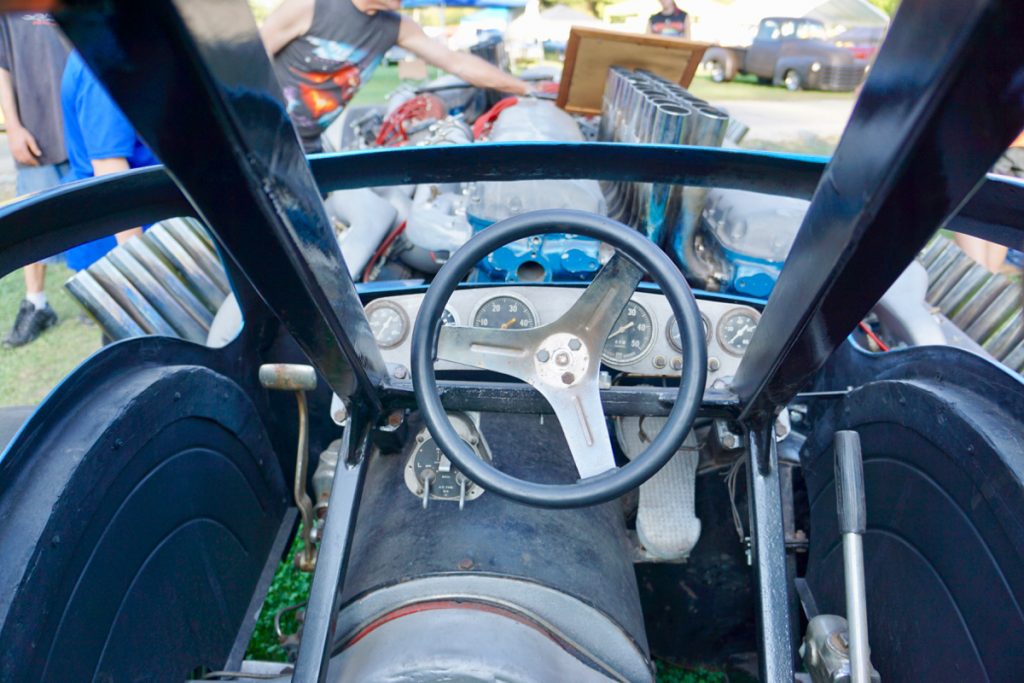 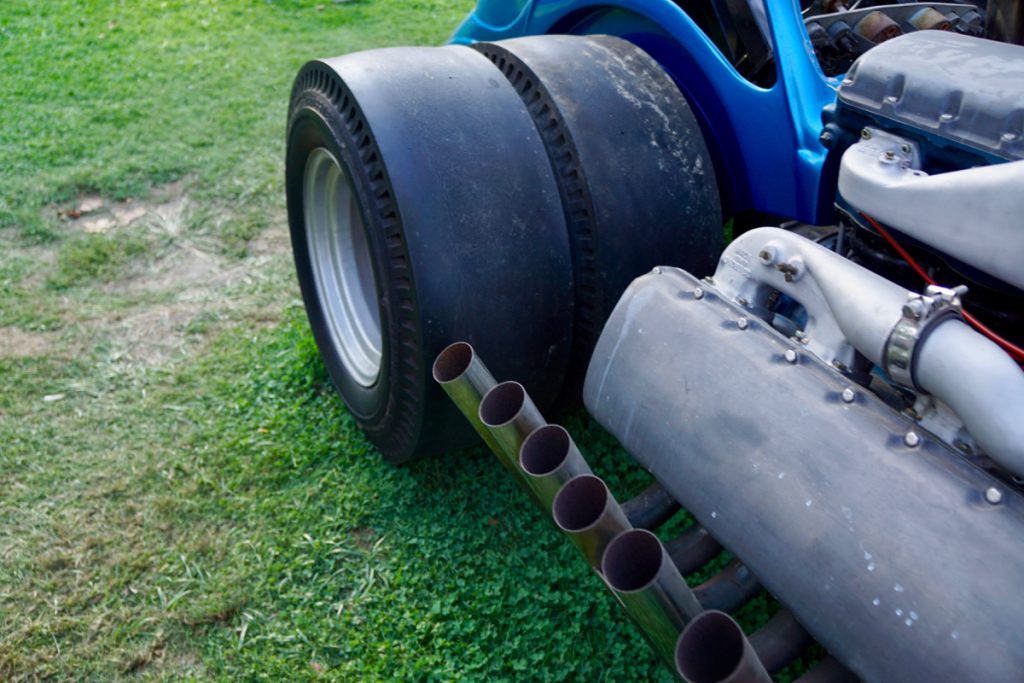 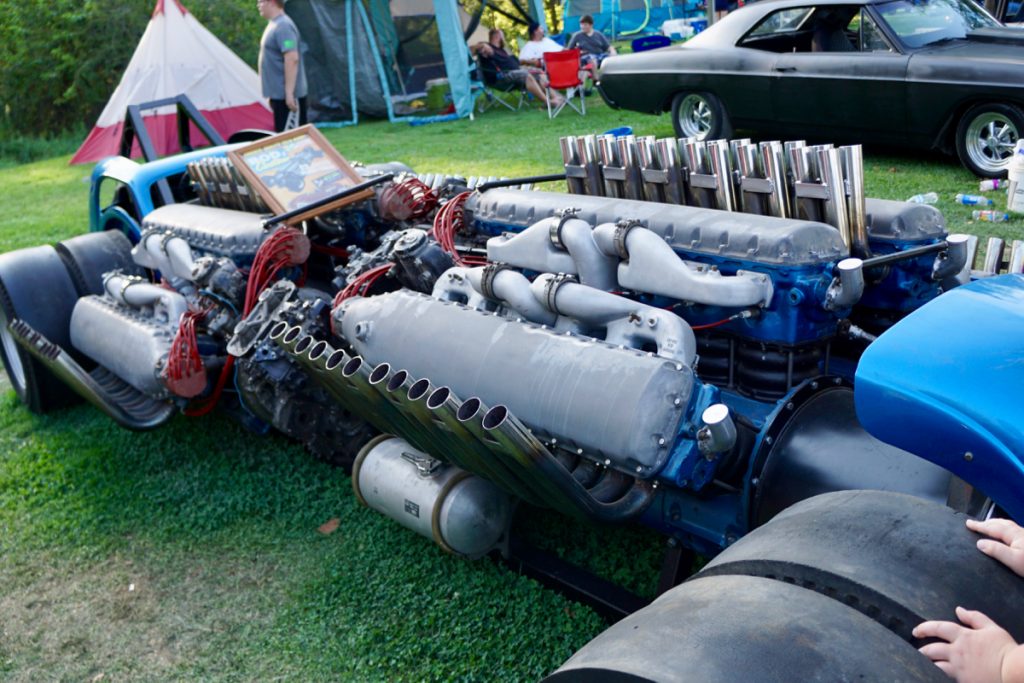 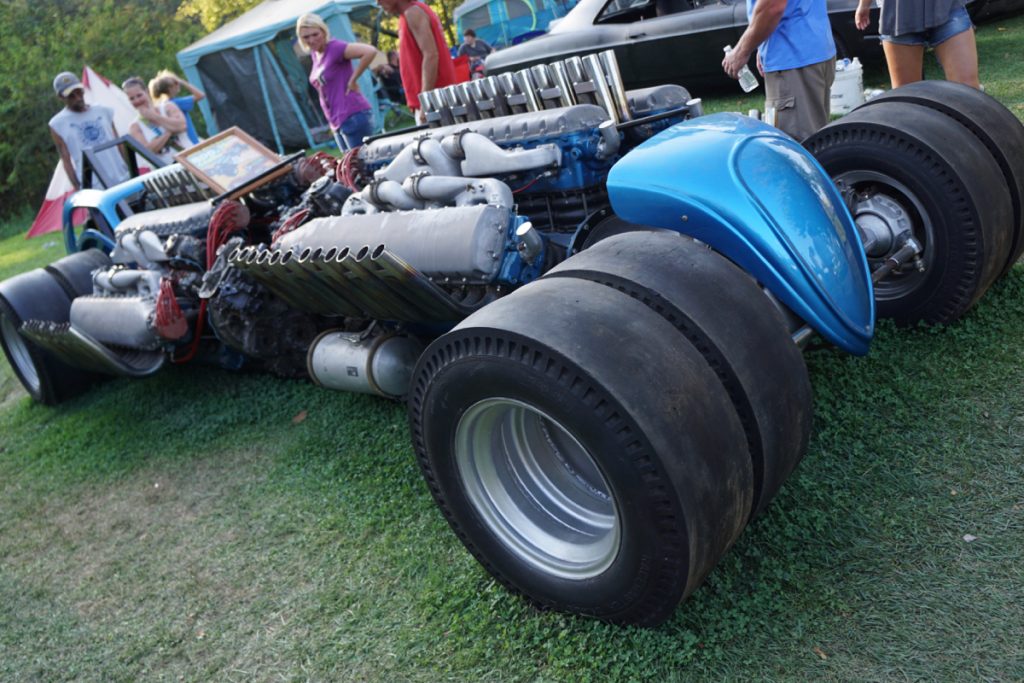 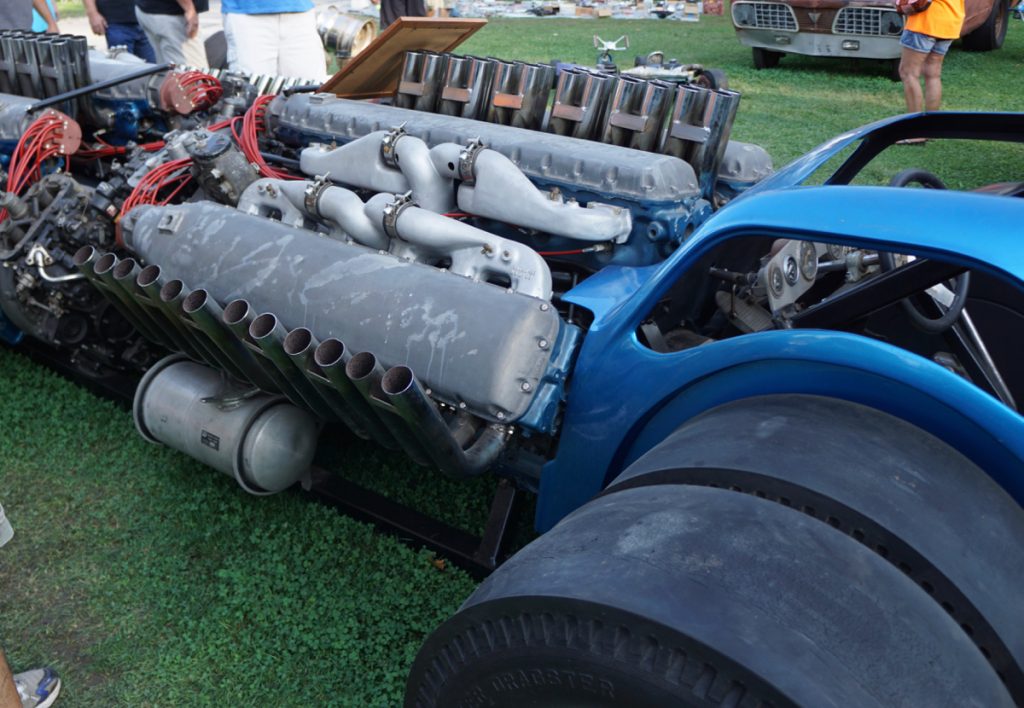 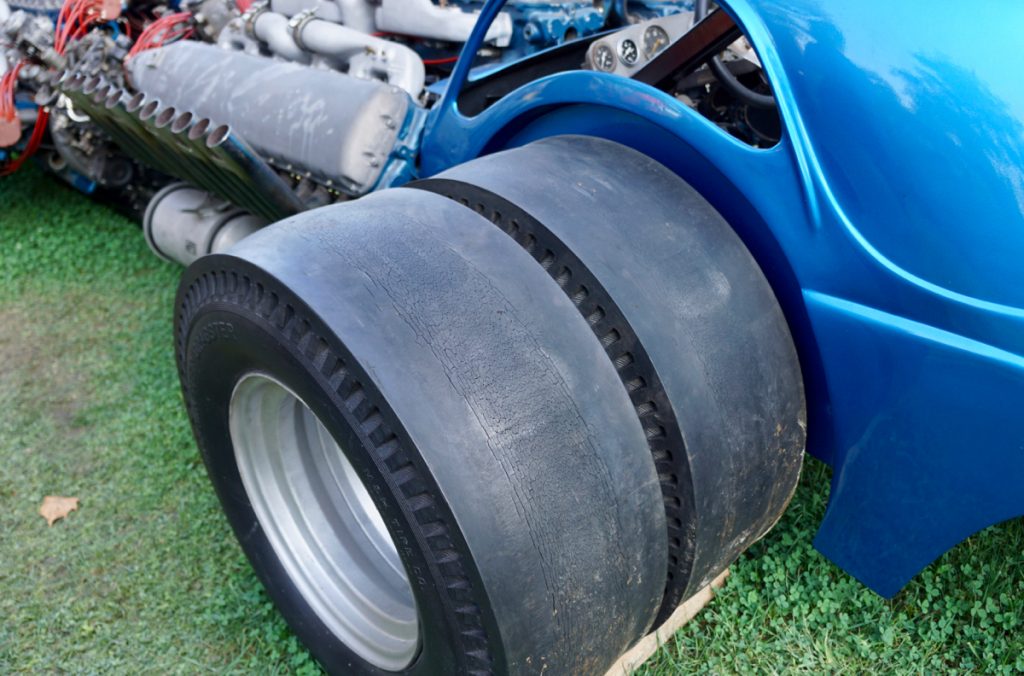 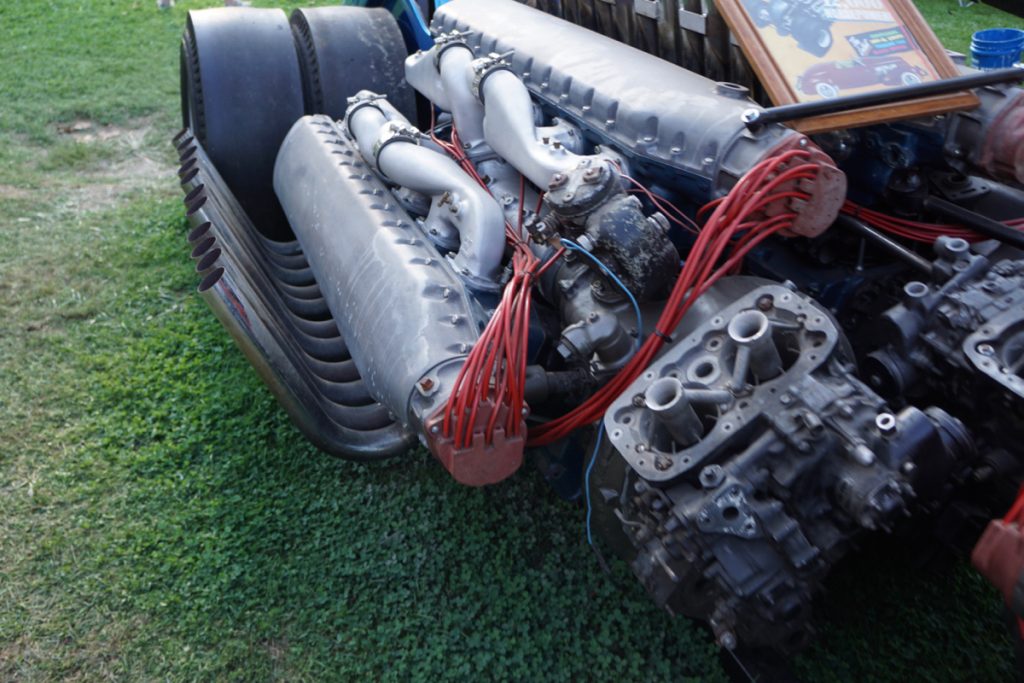 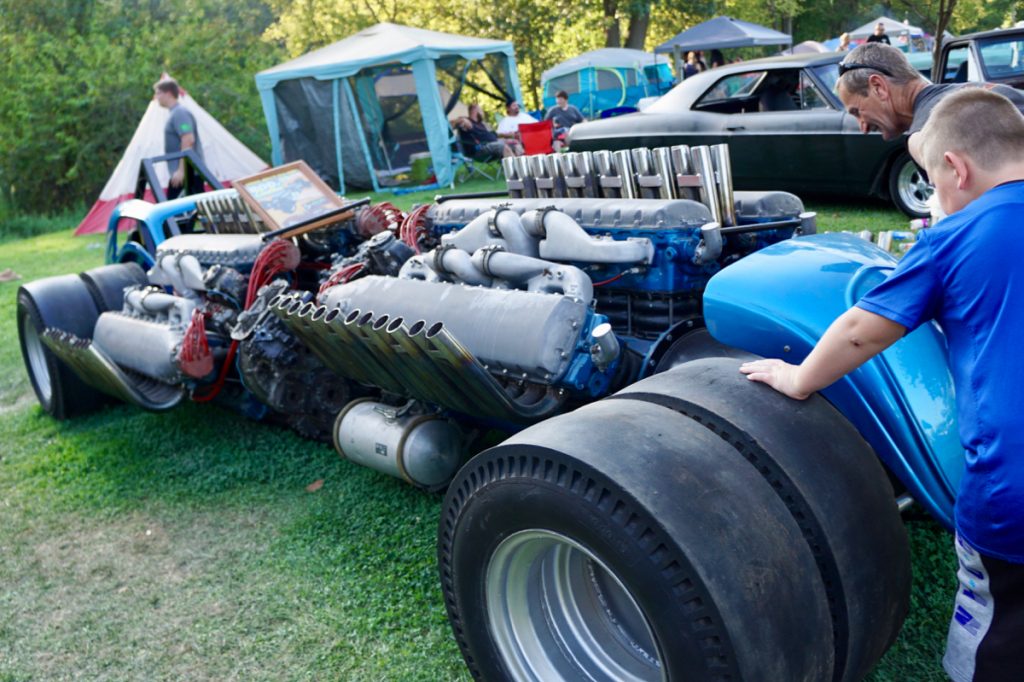 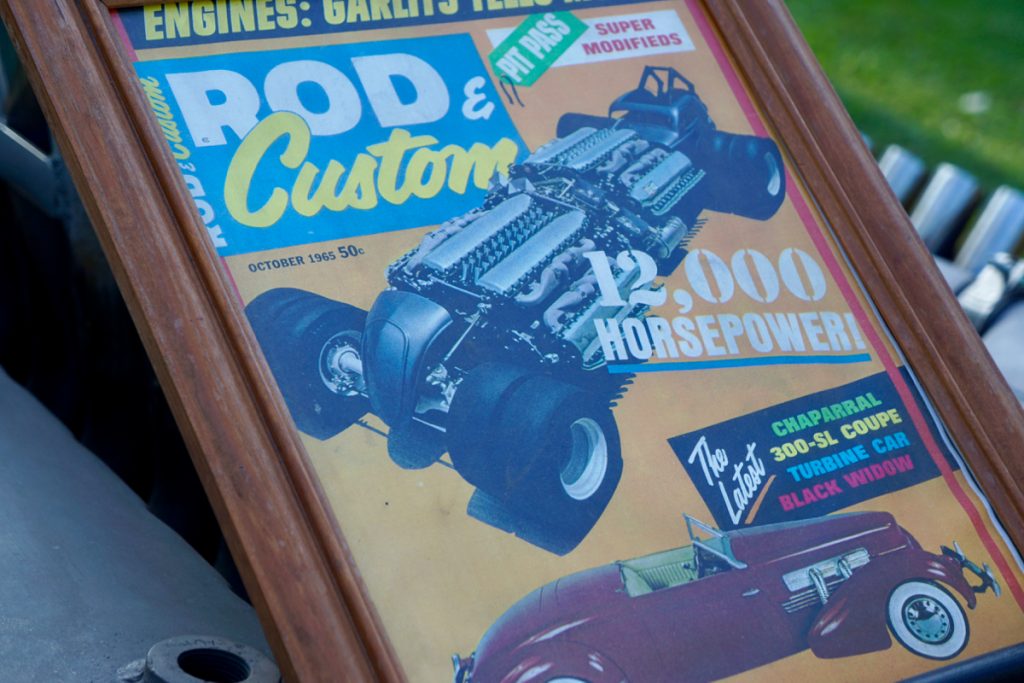 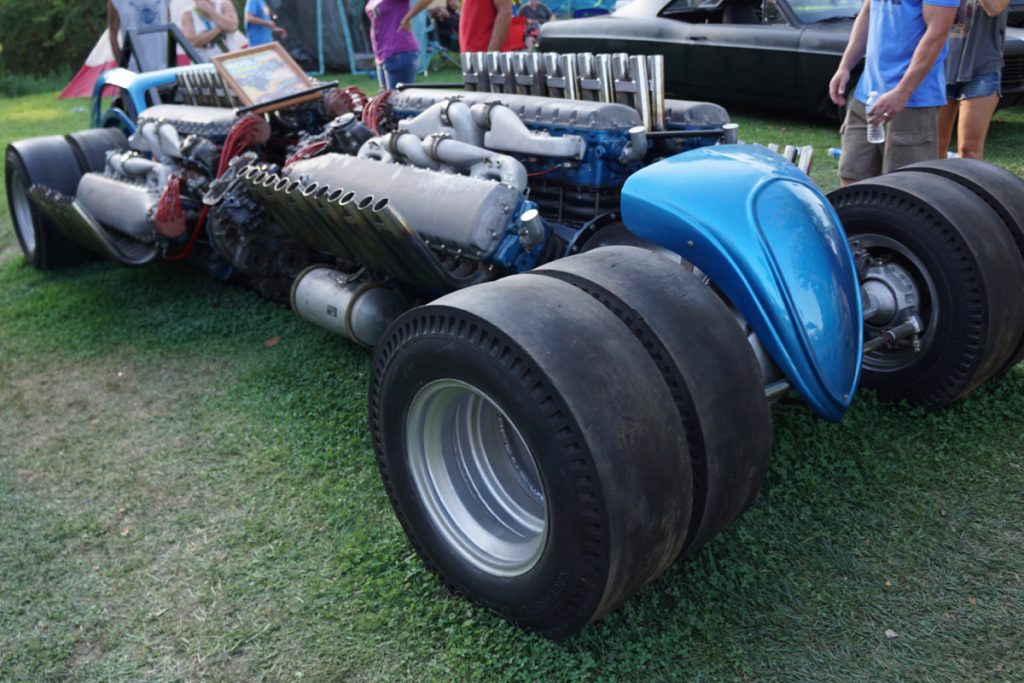 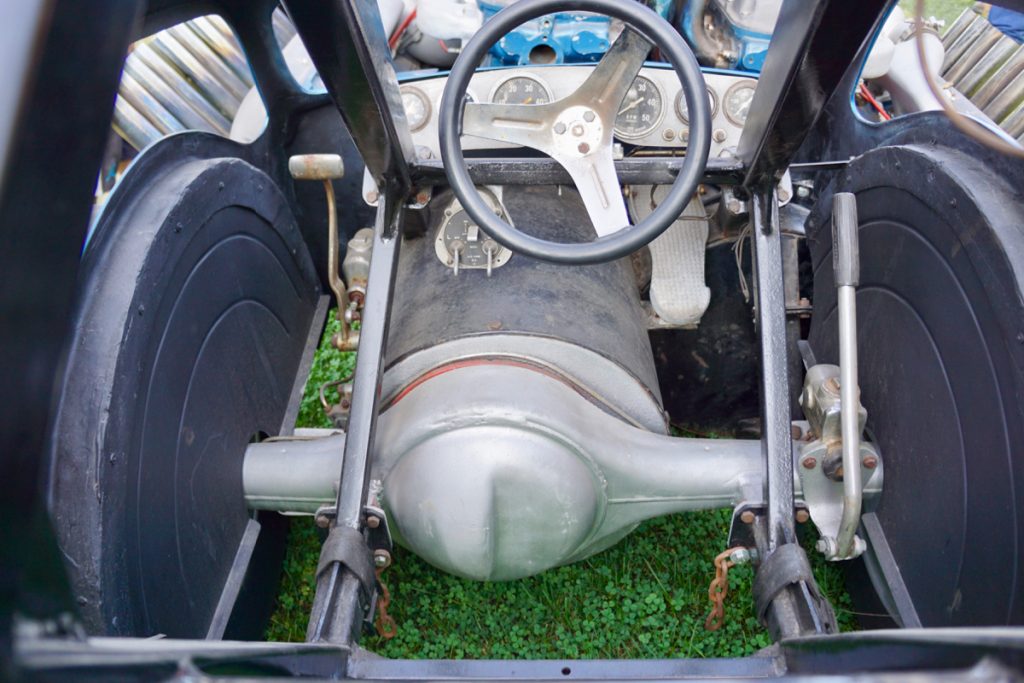 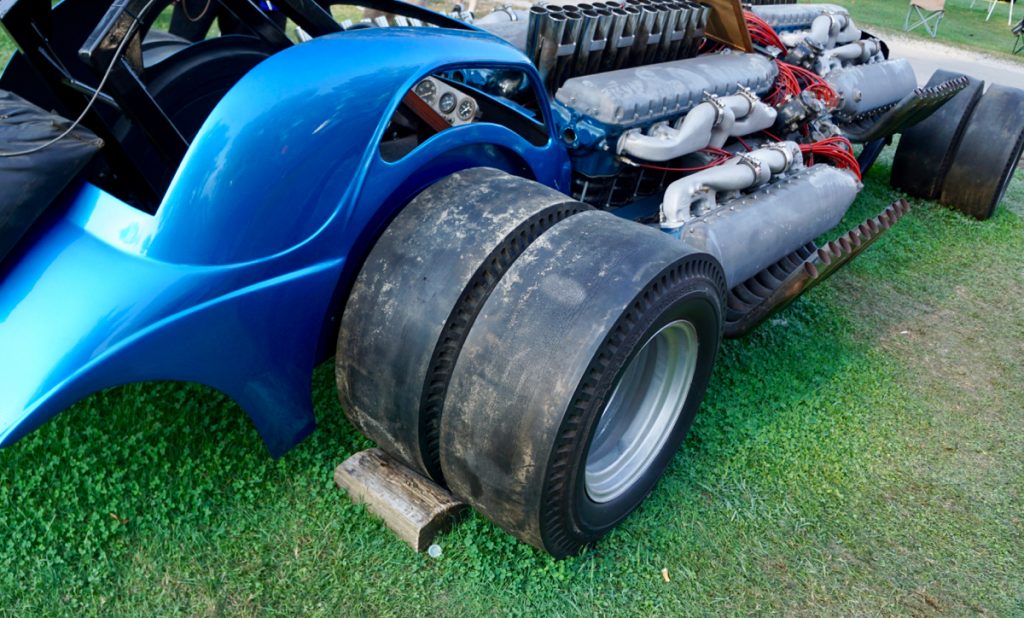 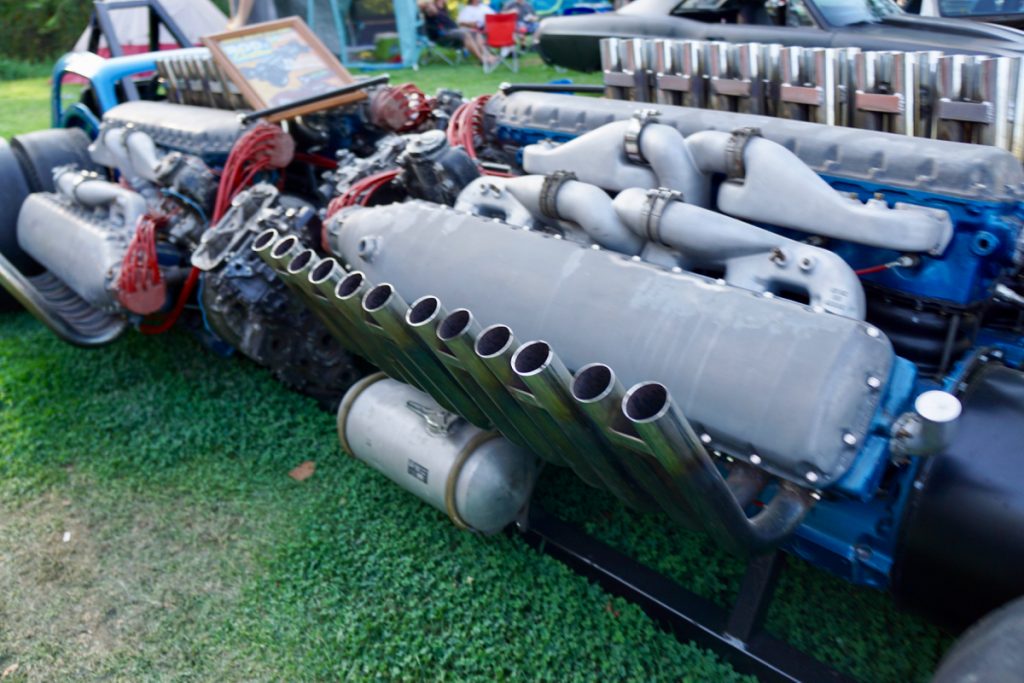 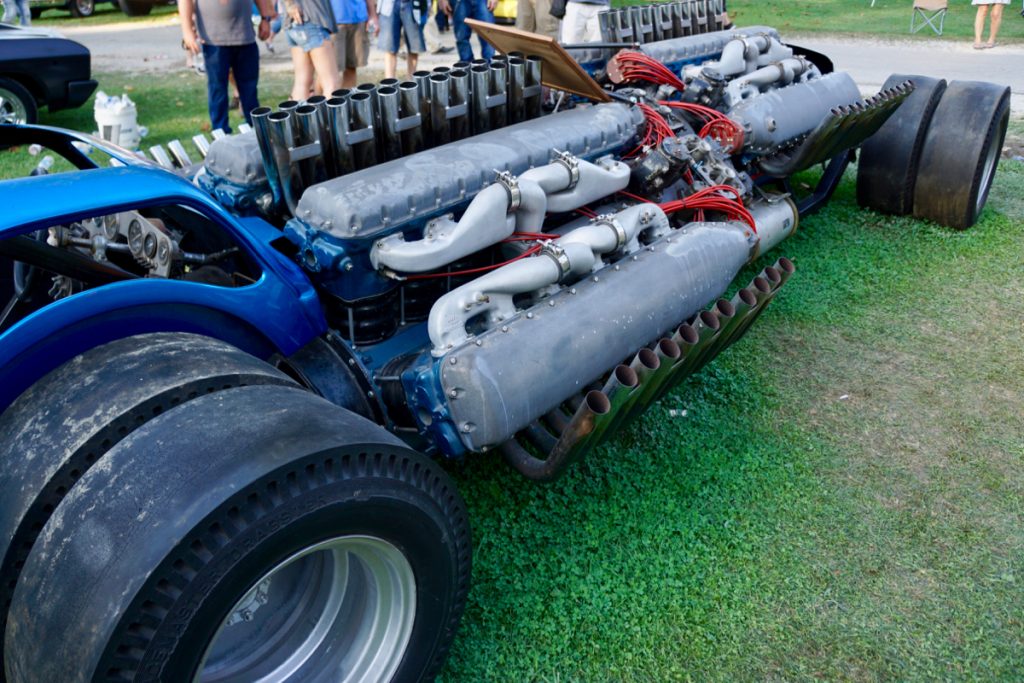 The “Quad Al” now resides in the drag collection of Mike Guffey who did the current restoration.  The frame, wheels and dual bellhousings were about all that was left of the original dragster when Mike acquired it.  He executed a cosmetic restoration centered around the Allison blocks and valve covers.  Mike said that fitting the car with functional Allisons would be extremely expensive, and frankly not very feasible since the parts are in such short order.  Regrettably leaving this once 12,000hp colossus as one heck of a showpiece with the lamentable title of the “Wildest Competition Coupe You Never Saw Run”.  And to me, it will forever beg the question, would you have what it takes to strap in and go for it?

If you’re interested in getting your fix of the hottest rides on four or even eight wheels, drop us a line and we’ll hook you up!

This ride is by no means new news but since when is only new stuff cool!  The facts are somewhat sparse, but there is still tons of online chatter about the “Quad Al” and it’s history.  I have tried to distill as much of it as I could and tried to reach out to the current owner with no avail. The 3 historical pictures and some of the background info were thanks to Hemmings Daily and “Sick Cylinder” on GTPlanet as well as a forum post on UltimateCarPage .  Please feel free to get in touch and straighten me out if I’ve made a misstep.